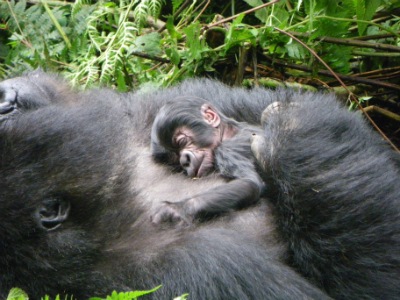 Mahirwe, a 17-year-old female in Kuryama's group, gave birth to a new infant sometime during the night of October 28 and the Fossey Fund's Karisoke™ Research Center trackers were delighted to discover the tiny newborn nestled protectively in its mother’s arms the next morning.

The infant is a welcome addition to Kuryama's group after the loss of two members. The dominant silverback Kuryama left on May 31 after an interaction with Isabukuru's group, and female Muganga transferred to Isabukuru's group on June 25. The birth of the new gorilla brings the group’s membership up to 14 individuals. Silverback Kirahure, formerly Kuryama's subordinate, now leads the group.

Research assistant Jean Paul Hirwa and Karisoke trackers attempted to locate Kuryama's group on October 31. However, there are so many groups in the bamboo zone at this time that their tracks are mixed and difficult to distinguish and they were unable to find the group. 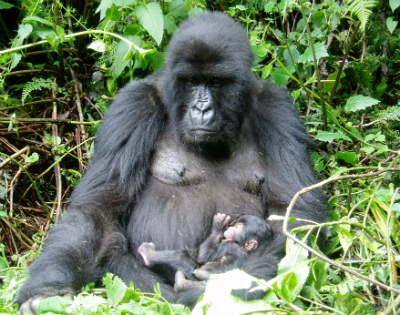 Mahirwe is an experienced mother, having successfully raised 8-year-old blackback Igihozo and 4-year-old juvenile Haguruka. The Karisoke field staff are anxious to see how the two brothers will react to the new infant. Is Haguruka staying with the mother and baby during periods of rest? Are the other members of the group approaching Mahirwe, curious about the new infant, as often happens? How has Kirahure reacted to the birth? Is mother Mahirwe carefully protecting her offspring from the cold rain? Is the new addition a male or female?

We will be providing updates as more information arrives from the field.