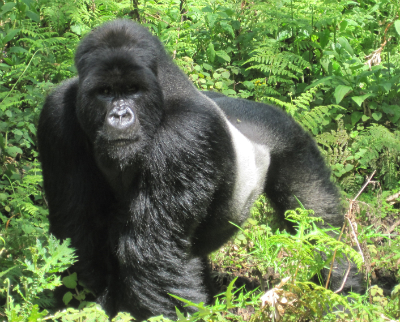 After the 17th day of interaction between Gwiza and the Titus group of gorillas, led by silverback Rano for the past two years, the situation’s outcome remains unclear. According to the Fossey Fund’s Gorilla Program Manager Veronica Vecellio, many different scenarios could unfold. The gorillas have already begun to group together and then regroup, resulting in several different formations as both Gwiza and Rano have assumed the role of lead silverback.

The field staff observed Gwiza leading all but two silverbacks (who remained with Rano) at last week’s end. Today however, the group members are rejoined with Rano while Gwiza and female Fat are resting, feeding and nesting together, 15-20 meters from the group. It is possible that the couple could split off on their own, starting a new research group of gorillas.

Unfortunately, infanticide is yet another possible outcome of this situation and the field staff are concerned about pregnant female Imvune. If Gwiza decides to stay, moving into the dominant silverback position, and Imvune gives birth, it is likely that Gwiza will kill the infant (who was clearly sired by another male). Fossey Fund Karisoke researchers plan to conduct another pregnancy test on Imvune to ensure that she has not miscarried from the high amount of stress the group has been under during the last several weeks.