Bwenge’s group has had a tough time of it lately, as two individuals have required a medical intervention within the last month and one, an older female, remains in fragile condition. 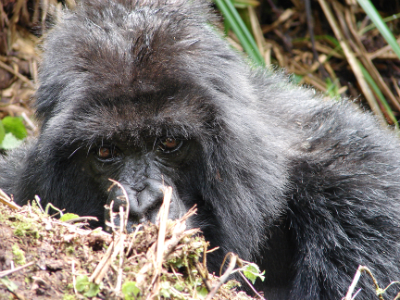 Staff from the Fossey Fund’s Karisoke™ Research Center, the Mountain Gorilla Veterinary Project (MGVP) and the Rwandan Development Board (RDB) performed an intervention Oct. 4 on Ginseng, a 31-year-old female. Ginseng has ranged on the periphery of the group for some time now, but during the last several weeks she has also been travelling alone periodically. This unusual behavior has recently been observed in some other females, including Umusatsi, Kubyina and Kwiruka.

Four days previously, on Oct. 1, after Ginseng rejoined her group she sustained several injuries on both hands and feet as a result of aggression from the group’s dominant silverback, Bwenge, who is also her son. She stayed with the group but has been trailing a considerable distance behind and Karisoke trackers discovered her previous night’s nests to be at least 100 meters from those of the other group members.

Ginseng was moving very slowly, resting frequently and appeared to be very sore and weak when the veterinarians observed her the day before the intervention. They suspected that some of her wounds, such as an open cut on her right ankle, had developed an infection. It is unknown whether the female is sore from Bwenge’s aggression or weak from a systemic infection, but with her concerning behavioral changes, all of those involved felt a medical intervention was necessary. 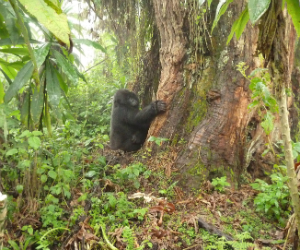 The intervention team included Karisoke researcher Winnie Eckardt, PhD., veterinarians Drs. Jan Ramer and Julius Nziza of MGVP and Dr. Elizabeth Nyirakaragire of RDB and Karisoke and RDB trackers. The team found Ginseng at 8:30 a.m., in the saddle region between Mount Visoke and Mount Karisimbi. Ginseng appeared to be slightly lethargic and was not feeding regularly. Taking advantage of her initial 800 meter distance from the rest of Bwenge’s group, the team was able to safely and successfully carry out the intervention.

The veterinarian’s medical assessment determined that, although Ginseng’s heart rate and respirations were normal, she had lost some weight and had a low temperature. She also had blood in her nostrils and a deep wound on the knuckle of her left middle finger. A physical exam was conducted, samples were collected and antibiotics, anti-inflammatory and de-worming medications were administered during the intervention.

Fortunately, the rest of Bwenge’s group moved closer while the medical assessment was being conducted, closing the gap between them and Ginseng to just over 100 meters. Everyone involved hopes that, given the closer proximity of her group, she will have the chance to rejoin them as soon as her strength allows.

Eckardt visited Ginseng the following day to evaluate her progress, and spent four hours with her. Ginseng had moved a few meters from her nest but was not eating much, which makes her weaker. She had some swelling on her head and face, but the reason is unknown. Eckardt reported that during the last two hours of observation Ginseng seemed to be more alert, but Fossey Fund staff are very concerned and will continue to monitor the situation. Dr. Nyirakaragire, the RDB veterinarian, will visit Ginseng on Oct. 6.