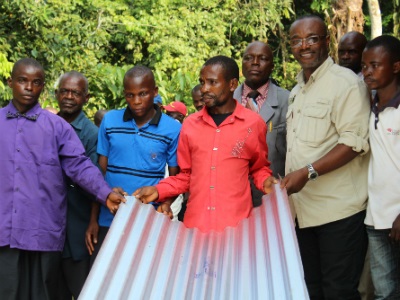 Since the Fossey Fund’s initial involvement in our field site at Nkuba-Biruwe in the Democratic Republic of Congo (set up in 2012 to track unhabituated Grauer’s gorillas), partnerships with traditional landowners have been intrinsic to our work’s success because the relationship between people and land is critically important. Most people in this area utilize their land for bushmeat hunting, mining and growing crops, such as cassava.

When the Fossey Fund’s Congo Program Director Urbain Ngobobo first approached villagers in Nkuba to propose setting up a conservation project, he had to convince local landowners that protecting the forest was in their best interest. As part of the process, the Fossey Fund hired staff from the local community, trained them to monitor and protect the wildlife living on their land and developed alternative sources of protein that could replace the bushmeat.

The Fossey Fund held a ceremony in August to present local landowners with metal roofs for their homes in Nkuba. The ceremony, which will become an annual event, is seen as a symbolic way of recognizing individuals willing to support conservation. During the ceremony, the Fossey Fund donated metal roofs to three landowners, who previously had grass roofs for their houses. The rainy season starts in October and the metal roofs will protect several houses from heavy rains that occur in this region. They will also serve as a source of pride for the landowners.

In addition to the landowners, 28 individuals attended the August ceremony, including members of the landowners’ families, representatives from the community, and ther landowners, stakeholders and local authorities.

“During this ceremony, we could see a lack of resistance and that landowners want the Fossey Fund there doing community-based activity. We must remember our mission is to protect gorillas, but community involvement is essential and this was a positive outcome,” Ngobobo said. Other initiatives to promote community conservation and discourage the bushmeat trade include conservation education, assistance with farming and providing alternative sources of protein.