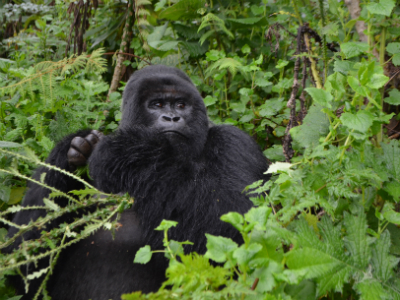 During nearly 50 years of monitoring mountain gorilla groups, the Dian Fossey Gorilla Fund staff have observed that groups can form and develop in a variety of ways. Over the past 15 years alone, we have observed 14 new groups form. Eight of these groups still exist currently, while some lasted only a few weeks or months.

One way that groups form is when a solitary silverback manages to attract females to join him. This was the case with several of the groups we currently follow, including the newest one, which was formed by silverback Iyambere at the beginning of this year.

At just 14 years old, Iyambere earns credit for being among the youngest silverbacks to establish a group. He was born in Pablo’s group to mother Umuco and Iyambere’s grandmother was the well-known Tuck, who was one of Effie’s daughters. Effie was the matriarch of the largest and longest-lived gorilla family, so Iyambere has an impressive ancestry.

In 2013, Iyambere left Pablo’s group to become a solitary male, and our staff had not seen him in some time. On March 22, a male and female were observed interacting with Pablo’s group. The male was identified as Iyambere and interestingly, the female was Izuru, who is estimated to be 37 years old and thus among the oldest mountain gorillas known.

Izuru had previously lived in Susa’s group, which is one of the groups monitored by Rwandan park authorities for tourism. As a result of the March 22 interaction, Iyambere gained another female – 12-year-old Turimaso. At this point, we began monitoring the group daily. However, because it was so small and did not yet have a defined home range, it could not be located every day.

Then, on July 9, after 10 days of unsuccessful searching, the group was found with two more females! Even more interesting was that one was another elderly female (in fact the oldest mountain gorilla currently known) 38-year-old Poppy, and 19-year-old Tamu, both from Susa’s group. When the two groups met again on July 17, Turimaso transferred to Susa’s group. 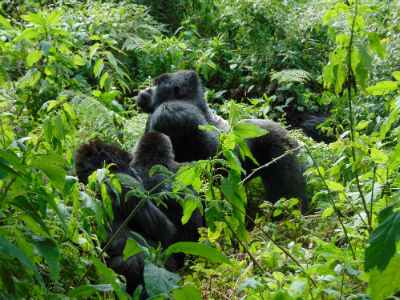 Female Poppy is historically the most exciting among the new arrivals! She was first seen as an infant by Dian Fossey and is also related to Iyambere (as a daughter of Effie, Iyambere’s grandmother). Poppy was born in 1976 in Group 5 and transferred to Susa group in 1985.

Even more exciting is that Poppy is the sister of another well-known elderly female, Maggie. Maggie was a favorite among many of the Fossey Fund staff and supporters but sadly disappeared earlier this year. We are very happy that at least her sister is now among our groups. We can definitely see the family resemblance!

We will keep following and documenting the dynamics of this newest group’s development, with its unusual range of individual ages. Iyambere’s group gives us another example of the complex relationship among gorillas, especially those originally from Pablo’s and Susa’s groups, who are now spread in so many different groups!