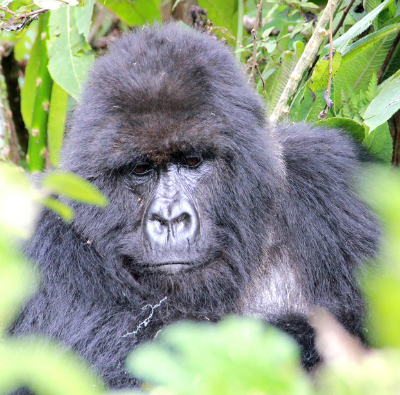 After five weeks traveling solo, Umusatsi was seen April 22 in Giraneza’s group! We could tell that she had already spent the previous night in the group, because an additional nest was found with the others.

Given the very long time that Umusatsi had traveled alone, her choice to finally join a group seems to have been a considered selection rather than a casual move to the first group she encountered.

It’s very interesting to see how easily she is integrating with the new group. Silverback Giraneza has displayed at her a few times and very often makes neigh vocalizations (known to express sexual interest). This morning, Umusatsi and Giraneza spent three hours resting together, and the silverback was establishing the new relationship by grooming the new female’s coat for a long time.

Among the other two females in Giraneza’s group, Taraja and Nyandwi, only Nyandwi has made any antagonistic behaviors toward Umusatsi. Those were clearly related to a dominance struggle. Taraja and her newborn baby are peaceful around Umusatsi. 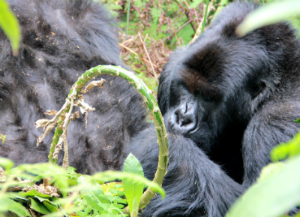 Mountain gorillas move from one group to another, and it often happens in the Virungas that gorillas who started out in the same group may meet again after many years apart. So for Umusatsi (29 years old) and Giraneza (18 years old) this is one of those cases. They lived together in Pablo’s group for more than 12 years. Umusatsi was already an adult female when Giraneza was born and he became a silverback while she was in the group, so they know each other very well. In addition, Giraneza’s mother, Cyiza, and Umusatsi are both originally from Susa’s group (one of those habituated for tourism) and transferred to Pablo’s group (previously the group Dian Fossey named Group 5) in the same period. Now, in an odd twist of fate, the kid that Umusatsi saw growing up is now the dominant male of the group she has transferred into!