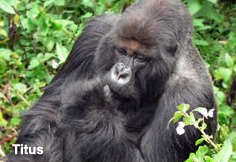 The aging silverback Titus continues to watch his group dwindle. Titus’s group is one of the main groups we monitor from the Karisoke Research Center, and had been strong and cohesive for many years. Now we are witnessing the end of an era.

On March 29, Bukima, a 14-year-old female emigrated from Titus’s group to a newer group led by the younger silverback Isabukuru. This latest transfer occurred during an encounter between the two groups. Bukima is the fifth female to leave Titus’s group in the last two years, with all of the transfers taking place during inter-group interactions. This fact highlights the inferiority of the Titus group and the weakening hold of its old silverback.

This last interaction was particularly stressful for Titus, who showed his weakness by trembling while he was facing silverback Isabukuru. Isabukuru displayed his strength with vigorous chest beats and loud vocalizations toward Titus. The interaction lasted more than an hour and all members of the two groups participated with displays and aggressions, especially the two dominant silverbacks and the blackbacks (younger adult males). 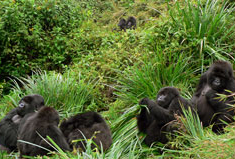 Karisoke staff are collecting behavioral data every day to record the results of the transfer. For that purpose, Bukima is followed as a “focal” animal four hours per day. Based on these observations, we can report that Bukima was quickly well integrated in the new group. Starting with the day of the interaction she became comfortable with all group members, showing particular familiarity with females Isaro and Ikaze, who were once members of the original Beetsme/Titus group as well. In fact, Bukima and Ikaze are sisters and their strong social bond has been evident as they began to spend many hours grooming and resting in physical contact.

Isabukuru, the dominant silverback, is obviously interested in showing the new female his leadership and physical strength. Isabukuru is supportive of Bukima and often intervenes in her favor when she gets involved in disputes with other group members. The second male of the group is Kubaha, who is still a blackback. He is also interested in the new female but is forced to maintain his distance by the dominant Isabukuru. In any case, Bukima’s chances of future reproductive success are much greater in this new group, than they were with the aging Titus.

Two days after her transfer, Bukima developed a visibly swollen breast, confirming the fact that she had still been nursing her 3-year-old infant Ihumure, whom she left behind in Titus’s group. For this reason it is important for us to follow the behavioral changes of the infant, due to this early separation from his mother.For mountain gorillas, the age of independence for a youngster comes at around 3-1/2 to 4 years of age. Despite his early separation, Ihumure (who was 3 years and 2 months at the time) was already strong enough to survive without maternal care, but the forced division caused some behavioral changes. Soon after the interaction, he frequently made call vocalizations and seemed to want to move towards Isabukuru’s group. Titus followed him and made sure that the little gorilla didn’t get dangerously far away. Titus was visibly upset by Bukima’s departure too, and joined Ihumure in calling vocalizations directed toward Bukima. 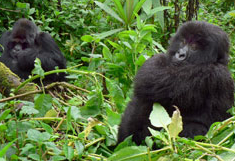 Once again Titus is demonstrating his kind nature and taking care of Ihumure, as he did in the past for two other young gorillas after the transfers of their mothers. Our observations of their nest sites showed that since the day Bukima left, Titus and Ihumure have slept together in twin nests, which provides the necessary warm body contact for the infant. Similar behavior is observed during the daytime, with Ihumure always nearby Titus or resting with him in physical contact during the heavy rains and cold days of the April rainy season. Normally a mother would do this, but Titus’s group is now composed entirely of males, with the exception of Tuck.

Ihumure is choosing to stay close to Titus rather than his usual playmate, young Segasira. Although his mood is low, he is feeding regularly on the herbaceous vegetation and doing well physically. It will also be interesting to follow the future decisions of the only remaining female in the group and the potential establishment of an all-male group. This would be the second reported case in wild mountain gorillas and the second time for Titus, who lived in an all-male group for several years when he was transitioning from a juvenile to a blackback.