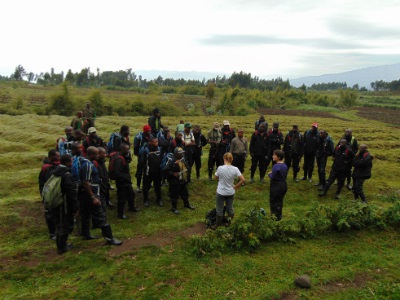 The Dian Fossey Gorilla Fund is delighted to announce that it will participate in the 2015 census of the Virunga mountain gorillas, a large collaborative project that is now underway. This effort will involve counting all the mountain gorillas in Africa’s Virunga massif, which straddles the borders between Rwanda, Uganda and the Democratic Republic of Congo.

Five trackers and two assistant team leaders from our Karisoke Research Center, as well as staff of the three national park and wildlife authorities, and other partners, will join some 60 people divided into multiple teams for the census. Dr. Winnie Eckardt, who is the Fossey Fund’s research manager at Karisoke, is also participating, as part of the training process and during the initial days in the field of each phase, to verify the quality of data collection.

Census staff will systematically walk throughout the gorillas’ entire range, following gorilla trails as they are encountered from west to east. The count will be based on observations of night nests, dung samples and hair samples, which provide various kinds of evidence. For example, the presence of silver hair indicates nests of silverbacks. Dung samples are used in several ways: to approximate age of individuals in each group by measuring dung size; to determine their sex and unique identity using DNA extraction; and to establish health status by analyzing gastrointestinal parasites that may be present.

The first part of the census will be conducted over a period of approximately 11 weeks and will be the first “sweep” of the area. A second sweep of the forest is planned to take place again early next year. Each phase will be followed by data analysis and the release of preliminary results, followed by a final report.

“The mountain gorilla census is critical for understanding the current population status and overall population trends of this critically endangered species, to confirm that our intensive protection efforts are working, and to provide all partners with a basis for good conservation planning,” says Tara Stoinski, Ph.D., president and CEO/chief scientific officer of the Fossey Fund.

The last census was conducted in 2010 and showed a total of 480 mountain gorillas in the Virungas, an increase from the 380 counted in the 2003 census. (The census does not include a separate population of mountain gorillas living in Uganda’s Bwindi forest. A census conducted there in 2012 showed approximately 400 gorillas.)

“It is a privilege for our staff to contribute to the census, which is also a great opportunity to resume and strengthen transboundary conservation efforts between the three countries,” says Felix Ndagijimana, the Fossey Fund’s director of Rwanda programs at our Karisoke Research Center.

The census staff will also collect information on illegal activities in the forest, and look for the presence or evidence of other large mammals in the park.

Stay tuned to our blog and news pages for updates from our staff in the field, as they help carry out the census.

The 2015 Virunga Massif mountain gorilla census will be conducted by the Protected Area Authorities in the Democratic Republic of Congo, Rwanda, and Uganda (l’Institut Congolais pour la Conservation de la Nature, the Rwanda Development Board and the Uganda Wildlife Authority) under the transboundary framework of the Greater Virunga Transboundary Collaboration. The census is supported by the International Gorilla Conservation Programme (a coalition of the Fauna & Flora International and WWF), the Max Planck Institute for Evolutionary Anthropology, the Dian Fossey Gorilla Fund International, the Institute of Tropical Forest Conservation, the Gorilla Doctors, and the North Carolina Zoo. The census is funded through generous contributions from Fauna & Flora International, WWF, and Partners in Conservation at the Columbus Zoo & Aquarium.