The mountain gorilla census is underway in the field, and Fossey Fund staffers who are participating are highly motivated and excited about the event. They even found some fresh gorilla nests on their first day. This first phase of the census includes six teams that camp in the forest, each with two cooks as well. After breakfast at 6 a.m., trackers start out on recces (predetermined paths) at 7. When they find signs of gorillas, they then leave the recce and follow the gorilla trail until they find the three freshest nest sites. 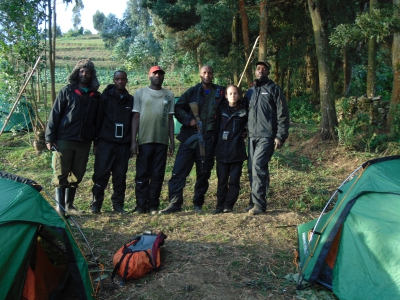 While everyone is looking for signs of gorillas, each has other jobs too, such as cutting through dense vegetation with a machete, entering data, drawing control points on a map and monitoring their progress. It's tiring work and everyone is grateful for the delicious food made by the cooks, especially on very cold mornings and evenings, says Dr. Winnie Eckardt, the Fossey Fund's research manager at Karisoke, who is working with the teams.