This summer has been a significant one for the gorillas, and fascinating for our field staff and researchers to watch unfold. With interactions, female transfers and the formation of subgroups, the gorillas have been keeping Fossey Fund staff busy in the field. Here is a report on two interesting interactions. 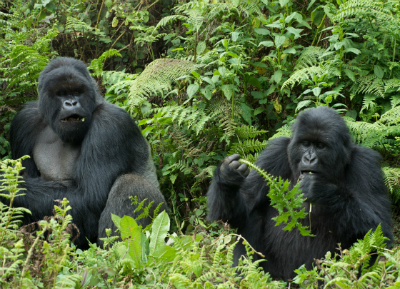 Gushimira’s group is relatively new, evolving out of an interaction in February between Gushimira, a lone silverback at the time, and Ugenda’s group. Sixteen-year-old Gushimira succeeded in gaining two females from Ugenda’s group, Kurudi and Kanama, and even defended his new group from lone silverback Gwiza, with whom the group interacted just days after the females had transferred to Gushimira.

Shortly after it formed, Gushimira’s group disappeared into the forest. Although field staff searched for the group, they were not located for several months. In a surprising turn of events, the young group reappeared on July 29, when they interacted with Titus’ group, testing the females’ loyalty to the young silverback, Gushimira. The interaction itself wasn't observed, but the consequences were clear. Dominant silverback Rano from Titus' group and Gushimira were both severely injured, with many fresh, bleeding wounds on the upper parts of their bodies, signifying to field staff that an intense fight between the two had occurred just before their arrival that morning. By the time field staff arrived, the two groups were 400 meters apart, but still engaged in an auditory interaction as the silverbacks continued to display.

The interaction led to the transfer of two females, one from each group. Nine-year-old Ubufatanye (better known by her nickname, “Fat”) moved from Titus to Gushimira, and 17-year old Kurudi moved from Gushimira to Titus.

The transfer of the two females was surprising. Gorilla Program Manager Veronica Vecellio says, “They were not related to the silverbacks they were with before the transfer (a fact that makes them convenient mating partners) and most importantly, they could be already pregnant. Both Fat and Kurudi had already transferred from their natal groups once, so we don't know what has driven this choice of changing groups once again.” 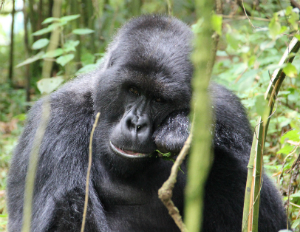 In August, Pablo’s group and Susa’s group (one of those habituated for tourism) interacted — a spectacular scene between the two largest groups in the Virungas. Both groups lost females during the interaction. Females Afrika, Umuco, Turibamwe, and Impuhwe transferred out of Pablo’s group, and females Ishaka and Irahirwe transferred out of Susa’s group.

The interaction was interesting in part because it seemed to be an opportunity for a couple of younger subordinate silverbacks in these large, multi-male groups to try their luck at gaining females and forming their own groups. Seventeen-year-old silverback Kiki, from Susa’s group, created a subgroup with Umuco, Turibamwe, and Impuhwe, after the first interaction between Susa’s group and Pablo’s group. Although these three females transferred back to Pablo’s group briefly, they seem to have rejoined Kiki. Unfortunately, the small subgroup disappeared on Aug. 14 and has not been found by trackers yet. Thirteen-year-old Afrika, originally in Pablo’s group, remained with Susa’s group.

Twelve-year-old Ishavu, who just became a silverback in July, made off with the two females from Susa’s group, Ishaka and Irahirwe, forming his own subgroup on Aug. 10. However, they rejoined Pablo’s group just a few days after the interaction. Vecellio reports, “As soon as the two females arrived, all the silverbacks [from Pablo’s group] reacted. A few minutes later, silverback Ishavu appeared too. Initially, Gicurasi [second-in-command in Pablo’s group] charged him, preventing him from coming close to the females. But after 20 minutes, he was already within the group. Many displays and aggressions were directed toward the two females and Ishavu. Several gorillas from Pablo’s group, including females and youngsters, participated actively in the interaction, biting Ishaka and Irahirwe badly.” Displays of aggression toward newly transferred females are common among mountain gorillas, but we hope they will integrate and become accepted by the other members of the group soon.