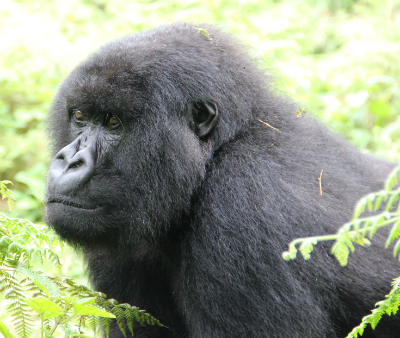 Dian Fossey Gorilla Fund International scientists have just published a paper in the journal Behavioural Processes, describing the use of a bamboo stem by an adult female mountain gorilla to presumably serve as a “ladder” for her offspring, helping him climb up a pile of vegetation to reach her. The paper’s authors include Cyril Grueter, Ph.D., former scientist at the Fossey Fund’s Karisoke Research Center; Karisoke Director Felix Ndagijimana; Fossey Fund Chief Scientist and Vice President Tara Stoinski, Ph.D.; and Martha Robbins, Ph.D., of the Max Planck Institute for Evolutionary Anthropology, who has been involved in many studies of mountain gorillas with the Fossey Fund.

This observation of mother gorilla Tamu was made in 2010 during a study focusing on feeding ecology among the mountain gorillas, led by Grueter for his post-doctoral research. Interestingly, most reports of such presumed tool use in non-human primates don’t involve wild gorillas, though there have been repeated observations of such behavior in captive western lowland gorillas. Observations of tool use have been seen much more frequently in chimpanzees, orangutans and capuchin monkeys, as well as a few other primates. Scientists are not sure why tool use among wild gorillas has been seen less often, but some theorize that it may be because gorillas have little need for tools in their daily food gathering (which is a primary driver of tool use seen in other animals), relying instead on plants that are easy to reach or that can be removed by brute force.

However, the instance in this paper, combined with a few other examples, suggests that wild gorillas are capable of tool use. Although more such observations are needed, and scientists can’t be certain that the bamboo handled by Tamu was intended by her to be used as a tool, it’s always exciting to add more potential evidence to the pool, especially in the case of wild gorillas.

“Tool use in some other primates is frequently seen in the context of food acquisition, whereas in gorillas it seems to be related to overcoming physical obstacles,” says Grueter. “Given that there are fewer than a handful of observations of (possible) tool use by wild gorillas, we should be careful not to over-interpret the findings. Nevertheless, I do hope that this anecdote will draw researchers’ attention to look for similar cases and that one day we will have a fuller understanding of gorillas’ cognitive capacities.”

Indeed, there is no shortage of studies related to the mountain gorilla going on right now at the Fossey Fund’s Karisoke Research Center. This shows the importance of the organization’s long-term database, says Fossey Fund Chief Scientist and Vice President Tara Stoinski, Ph.D. Thirteen scientific papers have been submitted or published in 2013 alone. The topics include: analysis of gorilla census data (especially the impact of population growth); vegetation changes since the 1980s; ranging patterns seen over time; reproductive cessation in females (menopause); brain growth; and even human-ape divergence. Many more studies are in the works, including bamboo research, paternity in multi-male groups, golden monkey projects and more.