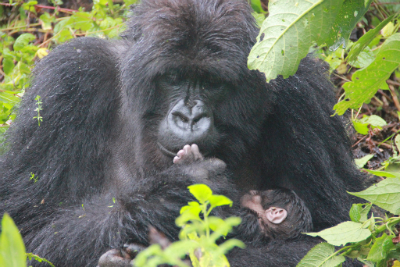 August 30 and 31 were good days for the mountain gorilla groups monitored by the Dian Fossey Gorilla Fund in Rwanda, with two newborns arriving! In addition, the Fossey Fund’s host and partner – Zoo Atlanta – is also celebrating the birth of a new western lowland gorilla in its collection, which is North America’s largest.

In Rwanda, 19-year-old female Inziza (whose father was Titus), was seen by Fossey Fund trackers with her second infant on Aug. 30. This new infant arrived a bit later than we might expect. Normally, gorillas give birth every three and a half to four years, but Inziza gave birth to her first infant, Igitangaza, five years ago – making this a longer than usual inter-birth interval.

Interestingly, Inziza has been late for other milestones as well. She was already almost 14 years old when she had Igitangaza, which is very late considering that the normal age for a mountain gorilla to give birth to her first infant is between 8 and 10 years old. This why Inziza’s first infant was named Igitangaza, which in Kinyarwanda means “miracle.” After several recent transfers, she now lives in Ugenda’s group, where her new infant was conceived, so they will have the complete protection of the silverback.

Then, on Aug. 31, another infant was born in the mountain gorilla groups, this time to mother Kunga in Ntambara’s group. This is her first infant.

With fewer than 900 mountain gorillas remaining on the planet, each birth is reason for celebration. And at Zoo Atlanta, a center of excellence for the care and study of gorillas, visitors will be delighted to see another offspring of beloved Willie B. “Willie B. was the face of the Zoo for two generations of Atlantans, and his legacy is very much in evidence today – particularly with the arrival of his newest grandchild,” says Raymond B. King, Zoo Atlanta president and CEO.

The Fossey Fund has its headquarters at Zoo Atlanta. The zoo also plays an important role as a member of the Fossey Fund’s Gorilla Council.