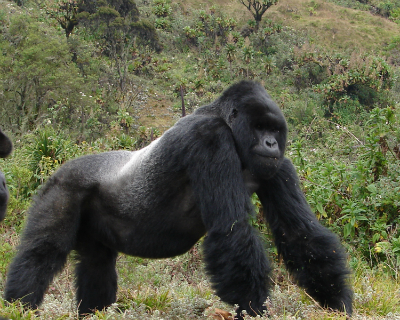 Cantsbee, the dominant silverback in Pablo’s group, at age 34 is the oldest silverback currently observed by the Fossey Fund’s field staff in Rwanda and the only one remaining who had been studied by Dian Fossey. Observers have noted for some time that as Cantsbee ages, his son Gicurasi periodically tests the older silverback’s strength, preparing for the day when Cantsbee will finally lose his leadership of the group, which is the largest gorilla group studied by the Fossey Fund. Now, a new contender, Musilikale, has joined the competition.
Fossey Fund researchers have observed over the years that dominance changes usually disrupt the entire structure of the group. In the case of Beetsme’s group, which split in 2007, several lower-ranking silverbacks were kicked out of the group entirely. Of those three silverbacks, two — Rano and Bwenge — went on to lead their own groups, while one silverback, Ubwigenge, was never seen again. Life as a lone silverback can be difficult, and forming or acquiring their own groups is a challenge. Some silverbacks never manage to form their own groups at all. The tenuous situation of lower-ranking silverbacks during a dominance shift may be behind the interesting behaviors Fossey Fund staff have observed from silverback Musilikale. 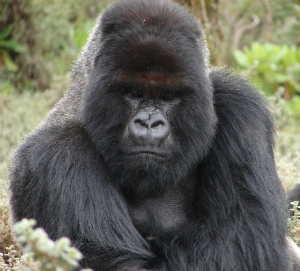 Musilikale has been a peripheral group member, ranging at the outskirts of Pablo’s group. Recently, however, he has been seen copulating more frequently with the females. Then, earlier this month, Musilikale challenged Cantsbee. During feeding time, Musilikale entered the group and began feeding near Cantsbee and several other gorillas. As Cantsbee and the others moved on to feed, Musilikale followed them. Soon Cantsbee jumped at Musilikale and bit him. The two silverbacks hit each other, and then Cantsbee, with the support of several other group members, chased Musilikale away. It did not develop into a major fight, but the challenge was interesting because while Musilikale sometimes challenges Gicurasi, up till now he had not challenged Cantsbee. 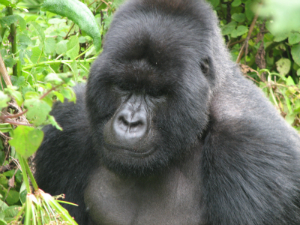 Noting that Musilikale does not have close relatives in the group and is therefore vulnerable to being chased out during a dominance shift, Fossey Fund researchers think it is possible that Musilikale is trying to strengthen his bonds with other group members. In addition to the ongoing challenge to Cantsbee by Gicurasi, last year several more blackbacks reached full maturity at 12 years old and became silverbacks and therefore potential challengers. Urugwiro, another blackback, is just becoming a silverback now. All together, including Urugwiro, there are now seven silverbacks in Pablo’s group. This is an unusually large number of silverbacks to be living together, and certainly adds to the pressure on Musilikale to establish his place in the hierarchy.
Musilikale’s new behavior is a reminder of just how complex the structure of gorilla society is. Pablo’s group is an amazing opportunity to watch gorillas adjust to the pressures brought on by a leader’s aging. We will keep a keen eye on Musilikale and the other silverbacks to see how the group’s dynamics continue to develop.