Musilikale Leads Split from Pablo’s Group, at Least for Now 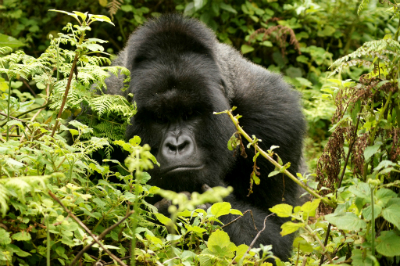 Pablo’s group seems to be split yet again. Musilikale, a peripheral silverback in the group who has a history of challenging both the group’s dominant silverback, Cantsbee and his son, the second-ranking silverback Gicurasi, has been spotted several times in the past few weeks without the rest of the group except for seven other gorillas, mostly females. Although at this point it is too soon to tell if the split will be permanent or not, it is definitely a topic of interest for Fossey Fund researchers and trackers, as this is the longest period of time Musilkale has separated himself from the group.

It will be highly unusual if Musilikale succeeds in splitting off from the group with several of the other members, because he has no close relatives in Pablo’s group and his history with the group is short, as he only secured his place as a member in November 2012.

Everyone at the Fossey Fund is very interested to see what happens, as Pablo’s group is the largest group we track, and it is also an unusually large group in the gorilla world. Pablo’s group also has an unusually large number of silverbacks. Currently there are nine in the group, and this year two more will reach the age of 12 — the age of full maturity that affords them silverback status. With this many contenders to take the dominant silverback position away from Cantsbee, who is now the oldest gorilla the Fossey Fund tracks, Musilikale might have some opposition coming his way. Research Assistant Jean Paul Hirwa stated “We will know if the split is permanent only if the separation lasts for two or three months. All we can do now is watch and wait to see what happens.”