The newly formed mountain gorilla group led by silverback Musilikale was very close to the original group (Pablo’s, led by Cantsbee) this morning. The two groups were in the bamboo zone exploiting the first bamboo shoots of the season. They were still separated at the end of the day, but just 100 meters apart. We are very curious to see if the group will reunite or not. 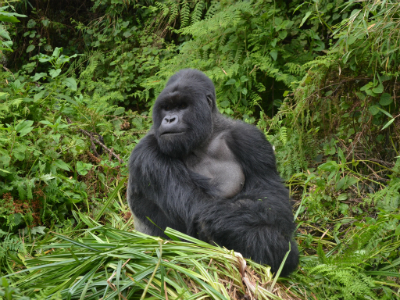 Based on the fresh traces of both groups, Fossey Fund trackers understood that Pablo’s and Musilikale’s groups spent the night about 500 meters apart and that it was Musilikale’s group that moved toward Pablo’s direction early in the morning. The silverback made several displays with hooting vocalizations and chest beats, but there was no response from Pablo’s group.

Late in the morning, blackback Kubona from Pablo’s group joined Musilikale’s subgroup and started playing and resting with the other gorillas, in particular with the young silverback Turakomeje.

The two groups were still very close when trackers left and Kubona was still with Musilikale. Anything could happen later today or tomorrow.