The pioneering organic food company Nature’s Path – already a strong supporter of gorilla conservation – has taken its partnership with the Dian Fossey Gorilla Fund International to a new level. Instead of having to compete for contributions from the firm each year, the Fossey Fund has been designated one of a small group of organizations selected to receive at least $20,000 per year for three years at a time, for special projects that protect the environment. The first grant under the new relationship amounted to $30,000 in 2011, and will be used to strengthen conservation education in the communities located near gorilla habitat in Rwanda and the Democratic Republic of Congo (DRC). 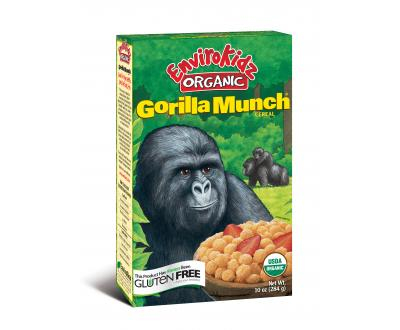 Nature’s Path Foods, founded by the Stephens family of Vancouver, Canada, produces healthy cereals and snacks now sold in over 42 countries worldwide. The owners’ commitment to supporting a sustainable environment through their business led them to dedicate one percent of sales from their children’s product line EnviroKidz™ to non-profit organizations that support endangered species, habitat conservation and environmental education for children – a natural fit with the Fossey Fund.

“The Fossey Fund’s unique blend of conservation and education is one that we are proud to share and promote through our EnvrioKidz products, “ says Jason Boyce, Sustainability Manager for Nature’s Path. “We’re happy to be able to support the Fund’s continued growth and success in a bigger way over the coming years.”

In 2001 Nature’s Path gave the Fossey Fund a small gift and began to feature the gorilla adoption program on Envirokidz™ “Gorilla Munch” cereal boxes. This raised almost $100,000 by 2010. The company’s donations grew over the years until in 2009 EnviroKidz gave the Fossey Fund a Giving Back Award of $35,000, which supported the revival of environment clubs in six schools near Rwanda’s Volcanoes National Park; internships at the Fossey Fund’s Karisoke™ Research Center for biology students from the University of Rwanda; and programs offered by the community-based Tayna Center for Conservation Biology in the DRC. The following year, Nature’s Path continued to support the environment clubs. In addition, it funded the expansion of a Disney Company-designed conservation education program offered by Karisoke to students at primary schools near the park in Rwanda, and supported Karisoke’s annual hosting of community leaders on a trek to see the mountain gorillas, an event that has led to community members becoming actively involved in helping to protect the park. 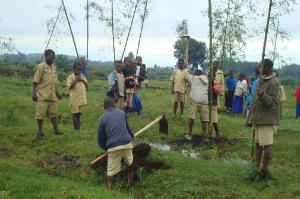 Now, Nature’s Path’s three-year commitment is helping the Fossey Fund to plan confidently for improvements to its conservation education programs. The youth environment clubs now include a “Citizen Science” initiative in which students help scientists to investigate the natural world. The students will also design and carry out their own research projects and report the results to their communities. The Disney-designed conservation education program will be expanded to twice as many schools, and a special coloring book will be developed to help the younger children learn. The community gorilla trek will be repeated, and a nature walk program will reach out to youth who are not in school and are at risk of engaging in illegal activities in the park. Documentary films about conservation will be shown to the public at 12 sites in the communities, and the Tayna Center for Conservation Biology will develop a conservation-themed radio drama for airing on its student-run radio station.

“The key to protecting gorillas and their habitat is partnership with members of the communities that share the gorillas’ ecosystem, so they can become leaders in preserving their rich natural heritage — and the key to forging that partnership is education,” says Fossey Fund President and CEO Clare Richardson. “We could not possibly carry out a comprehensive program of conservation education without the support of committed partners. Nature’s Path is a wonderful example of such a commitment.”