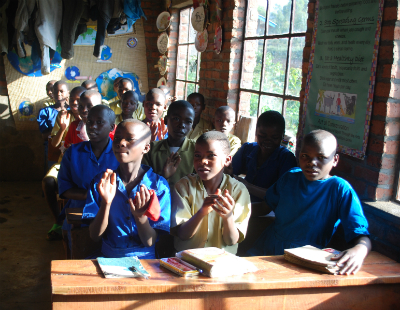 The Dian Fossey Gorilla Fund initiated a new component of its conservation education program in 2013, by authoring a multi-episode radio drama. The program, called “Nyiramacibili,” in reference to Dian Fossey’s Kinyarwandan nickname, follows the journey of brother and sister Rukanika and Mathilda, who live in the imaginary village of Kambere just outside of Volcanoes National Park. Over the course of the program, Mathilda and Rukanika go from poaching and selling bushmeat to working for the park service and benefitting from ecotourism and community development projects.

Although Rukanika and Mathilda are fictional, their stories reflect the real experience of some park guides and rangers who have been able to put the knowledge of the forest that they gained through hunting illegally toward a more stable and positive livelihood protecting the park and its wildlife. The Fossey Fund hopes that the story of Rukanika and Mathilda will help people living around Volcanoes National Park to imagine their own path to collaborating in the conservation effort and benefiting from it.

Among the sponsors who made this radio drama possible is Nature’s Path EnviroKidz, a pioneer in organic food and sustainability, which has been supporting the Fossey Fund’s conservation education initiatives since 2001 through their EnviroKidz Giving Back program. In 2011, Nature’s Path EnvironKidz selected the Fossey Fund as one of a small group of organizations that would receive at least $20,000 per year for three years for special projects without having to compete for the grant each year, which has made planning easier.

The development of “Nyiramacibili” allowed the Fossey Fund to reach an even wider audience through the airwaves. “Radio is very popular in Rwanda, so developing a radio program that is fun and engaging allowed us to reach more people than we can through our direct, in-person programs,” said Karisoke Research Center Director Felix Ndagijimana. “We were also able to touch on issues that can be a source of misunderstanding or tension between local people and conservationists, such as law enforcement and wildlife-human conflict.” 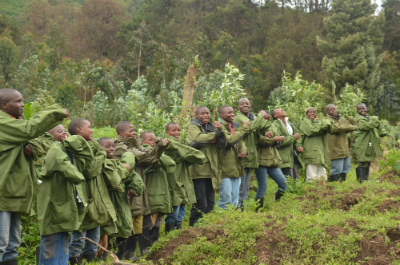 Musanze Community Radio, which aired the program, received a great deal of feedback after each episode. Callers made comments, asked questions, and requested more episodes. Many of the comments highlighted the consequences of poaching and the benefits of protecting wildlife. With the help of Cleveland Metroparks Zoo, the Fossey Fund is now organizing a survey to evaluate the success of the radio drama. This will allow us to develop new and effective content for the future.

In fact, the Fossey Fund is currently hosting a competition for a new radio program about water, sanitation and hygiene. Youth between the ages of 12 and 25 will be invited to submit stories addressing several key health issues in the region. The winning script will be adapted as a radio drama and broadcast on Musanze Community Radio, just as “Nyiramacibili” was.

“We were very excited to expand our education program’s reach in the Volcanoes National Park region through this radio program. We could not have done it without the support of partners like Nature’s Path,” said Fossey Fund CEO Clare Richardson. “As children in the U.S. start the new school year, we hope families will remember that making the choice to purchase environmentally aware brands like Nature’s Path can really help make a measurable difference to organizations like the Dian Fossey Gorilla Fund in implementing our conservation programs.”

Nature’s Path EnviroKidz believes breakfast can help save the world — or better yet, kids can. That's why they produce the only organic line of cereals for children. One percent of the sales of each box of EnviroKidz cereal benefits nonprofit organizations that support endangered species, habitat conservation, and environmental education for children. Envirokidz gets excited about helping endangered animals with fast facts and fun activities, growing their understanding of the environments that the animal mascots live in, as well as the environment they live in.

Nature’s Path Envirokidz Gorilla Munch is an organic, gluten-free puffed corn cereal. Its box features an illustration of a smiling young gorilla infant and includes facts about gorillas and the Dian Fossey Gorilla Fund International; ways to help; and a gorilla adoption promotion. EnviroKidz has also paid special attention to making the Gorilla Munch box easy for children to read so they can be inspired by these amazing primates. Fossey Fund staff were pleased to contribute words and vision to the packaging, which, in addition to its generous financial support, is one more way that EnviroKidz is helping us engage the next generation of gorilla enthusiasts in addition to its generous financial support.