On Feb. 16 and 17, primatologists from the Karisoke Research Center convened in Gisenyi, Rwanda (just across the border from Goma) for an intensive brainstorming session on the Dian Fossey Gorilla Fund’s Grauer’s gorilla program in eastern Democratic Republic of Congo (DRC). 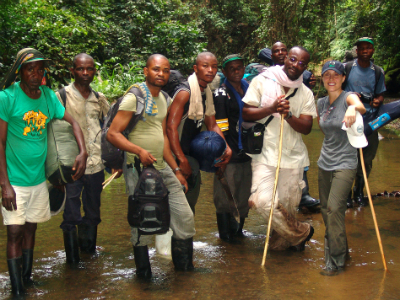 Although there is much knowledge to be gleaned from the field methods implemented at Karisoke in Rwanda’s Volcanoes National Park, the Grauer’s gorilla monitoring project will require a unique methodology. It was determined during the two-day planning meeting that while the anti-poaching patrols in Rwanda have been a key part of Karisoke’s “active conservation” approach, this technique is not feasible in eastern DRC, primarily due to the enormous size of the area. Instead, says Rosenbaum, “alternative ways of fighting poaching will be considered: intelligence gathering, monitoring of key areas (airstrips and areas surrounding the research station) and a hotline for reporting poaching incidents. Additionally, because of the multitude of threats that Grauer’s gorillas face in this region of DRC, the research program will prioritize data on these problems and the effectiveness of any solutions we implement.”

For many years, Karisoke has provided more than 50 Rwandan undergraduates and many graduate students with research opportunities. By implementing this educational model at the new DRC field station, the Fossey Fund hopes to benefit aspiring Congolese conservationists. As a first step, Congolese universities will host a competition for a research position at the field station, a groundbreaking opportunity for a young scientist.

For more than a decade, the Fossey Fund has worked alongside local Congolese leaders to establish nine nature reserves that encompass over 7,000 square miles of landscape. But, because the Grauer’s range covers some 26,000 square miles (an area more than twice the size of the entire country of Rwanda), there is still much work to be done to ensure the conservation of this gorilla subspecies. The Fund plans to implement an “active conservation” methodology in one reserve after another, and slowly expand as resources allow. 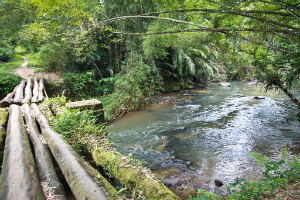 Expeditions to the reserves are being completed now. Most recently, Ngobobo and Jessica Burbridge, Fossey Fund field communications officer, flew from Goma to the Punia Gorilla Reserve (RGPU), via a bush plane through Kasese, DRC. The reserve is extremely remote and no roads connect the villages; they are only accessible by motorbike, through a network of narrow jungle paths.

The primary objective of this particular trip was to determine the Grauer’s gorilla’s presence in the region. Throughout the two days, 30 kilometers and 17 hours of trekking through the rainforest, the team of nine community reserve trackers and Fossey Fund staff discovered many gorilla nests of varying age and decomposition. As the team moved deeper into the forest, up and down countless mountains and ravines, various other indicators of gorilla presence made an appearance – old feeding sites, piles of dung and finally, the characteristic knuckle print in the mud that led right to a gorilla group. The Grauer’s gorillas in this area are unhabituated though, and fled at the first sound of the team’s approach. 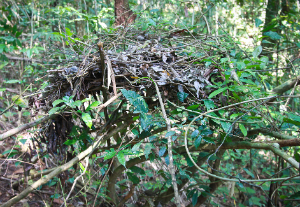 On the first two to three kilometers into the trek, the team encountered many villagers toting wood, water, palm fruit and food out of the forest. Just beyond that zone, the first snare was discovered, which was promptly destroyed. Two additional bamboo and wire snares and a trap designed to break the leg of its victim were found the first day. Human activity exploiting the forest’s natural resources also included coltan mining. In fact, the team flew out of the region on a plane that also carried bags of coltan.

There are a myriad of obstacles and challenges to consider as the Fossey Fund builds this new program. Working in the DRC is notoriously dangerous and extremely expensive, but the price tag is not too high for saving gorillas, one of the world's most crucial rainforests and the many other species that live in it.
Jessica Burbridge, Field Communications Officer