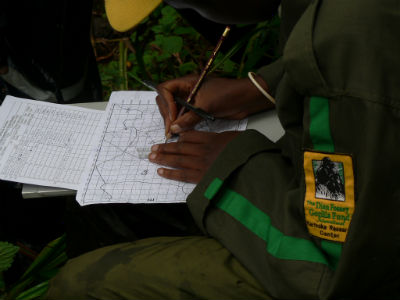 Eight months after the mountain gorilla census was carried out in the Virunga Massif, we are extremely happy to share the good news: A total of 480 gorillas were recorded, as opposed to 380 in the previous 2003 census. This reflects a 26.3 percent increase in the number of these otherwise still critically endangered animals. A separate population in the Bwindi Impenetrable Forest of Uganda brings the total world mountain gorilla population to around 782 individuals.

The groups daily monitored and protected by the Karisoke™ Research Center (KRC) in Rwanda’s Volcanoes National Park now include 126 individuals – a 17.4 percent increase from the number of gorillas we cared for in 2003. This increase in the KRC groups represents roughly 25 percent of the total increase in the population, yet these groups occupy only 10 percent of the Virunga range.

“I am delighted that Karisoke was able to contribute to the success of this very important census,” says KRC Director Katie Fawcett, Ph.D. “The results not only measure the success of our efforts to protect the mountain gorillas and their habitat; they also provide a great variety of information that will guide our work in future.” 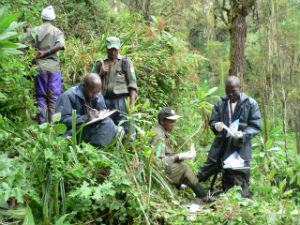 Overall, the census was a massive operation that spanned two months and three countries (Rwanda, the Democratic Republic of Congo and Uganda) and involved a strong collaborative effort by the park authorities of each country (RDB, ICCN and UWA respectively), as well as their partners, including the Fossey Fund, which played a crucial role in the process. Dr. Katie Fawcett, KRC director, was among the senior scientists who provided training, expertise and guidance. In the field, 13 of our staff – including one program manager (Deo Tuyisingize), three research assistants (Theodette Gatesire, Bernadette Arakwiye and Jean-Paul Hirwa) and trackers – contributed their knowledge, skills and great resilience, often working in harsh conditions and difficult weather. Their science training and familiarity with the field were invaluable assets throughout the census.

As mountain gorillas move freely in the misty slopes of the Virungas, crossing borders at will, the three countries had to be surveyed simultaneously to ensure that the entire gorilla territory was thoroughly covered. Twelve multinational teams of five members each carried out an impressive west-to-east sweep, in four phases of two weeks each. Using maps and compasses to mark the sectors surveyed, they walked consecutive transects (invisible lines that cross an area) on average half a kilometer apart. Every 250 meters they also recorded GPS points, in order to both identify the location of the team and record the type of vegetation encountered. 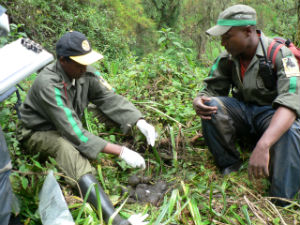 Once they met fresh gorilla trails, they would change course from the transects and attempt instead to locate the night nests. Even if some gorilla groups ranging in a particular area were well-known and habituated, with a precise individual head-count, the census teams had to treat all situations and gorilla trails indiscriminately: identify and count the night-nests and collect three different fecal samples from each nest, for lab analysis – one for DNA, one for parasites, and one for viruses. Moreover, they had to locate the night-nests of the same gorillas from three consecutive nights, in order to collect further fecal samples for DNA analysis and corroboration. Team leaders were also charged with processing the genetic samples. On the first day they placed the samples in tubes of alcohol, and on the second day they moved them into tubes of silica gel. All samples were then shipped to Leipzig, Germany, to be examined at the Max Planck Institute.

In the field, the laborious process started early every morning and lasted up to 12 hours a day, after which the teams camped in the forest. As March and April are in full rainy season, gorilla tracks were relatively easy to find, but forest paths were often muddy and inaccessible. The tough climbs and deep ravines encountered going up Sabyinyo Volcano were especially difficult tests of everyone’s endurance. Each evening in the camps a priority was to get the clothes dry for the following day.

“I am proud to have brought my contribution to this extraordinary process,” said Theodette Gatesire, the only African woman who led a census team. “Leading a team and seeing our operation succeed was very gratifying, especially at the end of some exhausting days in the field.” 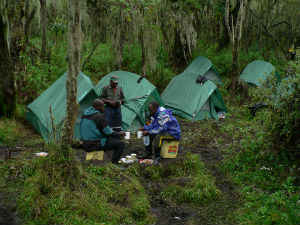 In addition to looking to establish a complete count of the mountain gorilla population, the census also recorded all evidence of human disturbance, such as snares, poachers’ trails, and signs of grazing, tree cutting and water collection. The presence of other animals that share the gorilla habitat was also carefully documented. This is of utmost significance in order to establish the impacts of conflict and conservation activities on the parks and the gorillas, as well as to determine a future course of action. Indeed, notwithstanding the excellent census results, the cross-border and in-country efforts to protect mountain gorillas must carry on and even expand their scope, as the habitat remains very limited and under continuous threat.

The Virunga Massif mountain gorilla census was conducted by the protected area authorities in three countries: L’Institut Congolais pour la Conservation de la Nature, the Rwanda Development Board and the Uganda Wildlife Authority. The census was supported by the International Gorilla Conservation Programme (a coalition of the African Wildlife Foundation, World Wide Fund for Nature, and Fauna & Flora International), the Max Planck Institute for Evolutionary Anthropology, the Dian Fossey Gorilla Fund International and the Mountain Gorilla Veterinary Project. The census was funded by WWF-Sweden, the Fair Play Foundation, and the Netherlands Directorate General for International Cooperation through the Greater Virunga Transboundary Collaboration.