On Jan. 27, Karisoke staff found an unidentified group of three gorillas in the trail of Bwenge’s group. Bwenge’s group is one of the more recently formed gorilla groups that we have been tracking at Karisoke, during the past year of dramatic changes among all the groups we observe. 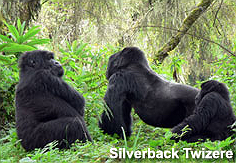 This new group was particularly nervous and the silverback was running after one female while the second female was following behind. As we approached the group, we were able to identify the silverback: Twizere, a young silverback (15 years old) who had left Shinda’s group (one of the main groups we have monitored for years) in August 2007 and who had since travelled as a lone silverback. The two females were: Nzeli, an adult female from Bwenge’s group, and Ikaze, a 6-year-old female from Titus’ group.
It was clear that an interaction between Twizere and both Titus' and Bwenge’s group must have happened in the early morning or in the evening before. As we traced back the trail left by the new little group, we were able to detect an interaction site, where Twizere encountered Titus’ group. The traces of Bwenge’s group were also identified and the second interaction site detected. A count of the night nests revealed that Titus’ and Bwenge’s groups were still intact during the night, so the interactions and transfers must have happened in the morning. 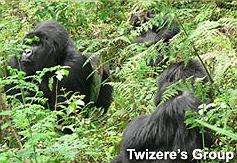 When we observed the new group, Nzeli appeared anxious and tried several times to move further away from Twizere, but she would be suddenly followed by him, as he tried to keep her with him and show her his strength with very energetic displays. Ikaze, who is still very young, patiently followed the movements of the other two, making several stops for feeding.
The fact that the group was incessantly moving shows the instability of the individuals, especially with Nzeli — the female — often being in the front. Twizere, however, had some peaceful moments with the two new females and for a few hours he seemed to enjoy his new position as leader. But those moments were always broken by Nzeli trying again to move away.
The situation stayed the same for one week, during which the group was regularly followed, and despite great difficulties, some behavioural data was collected. On Feb. 3, however, the new group was near Bwenge’s group and another occasion for transfer occurred. The two groups interacted and Ikaze and Nzeli decided to move into Bwenge’s group, leaving Twizere as a lone silverback once more. 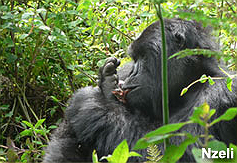 Unfortunately, this interaction resulted in a fight with some consequences. Nzeli was severely wounded by Twizere, when he tried to keep her from transferring. He bit her on both feet and the result was a very deep and open wound on her right foot and another less-deep one on her left foot. She moved with difficulty and was visibly in pain. Veterinarian Dr. Lucy Spelman of the Mountain Gorilla Veterinary Project soon came to see the case, and gave Nzeli a dose of antibiotic with the hope of avoiding a potentially deadly infection. Nzeli has since been monitored for the whole month by veterinary and Karisoke field staff. She is slowly recovering and the wound is reducing in size. She soon regained her appetite and started to feed normally again and to follow the group’s movements.
Ikaze, who was new to Bwenge’s group, was peacefully accepted by all members. Probably the other adult females felt that she was too young to be a potential competitor for hierarchy status and thus was not a problem. Ikaze demonstrated her kind personality and remained close to the wounded Nzeli. Bwenge and Ikaze knew each other already because both are originally from Beetsme’s group (one of the main groups we observe that has now split into Titus’ and Kuryama’s groups). Bwenge tried several times to mate with the new female, but since Ikaze is so young, these were not very successful. Then, on Feb. 12, Ikaze moved independently back into Titus’ group, which was a few hundred meters away from Bwenge’s at the time.
So, in the end, after all the actions, only a temporary change in the group composition resulted from Twizere’s attempt to have his own group after all.
Submitted by Veronica Vecellio, Karisoke Research Center 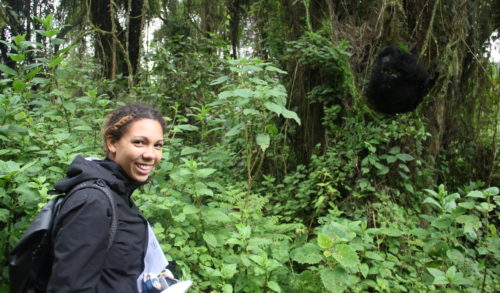 Interactions between gorilla groups are endlessly fascinating. Interactions require considerable multi-tasking for males, as they have to protect their group,...