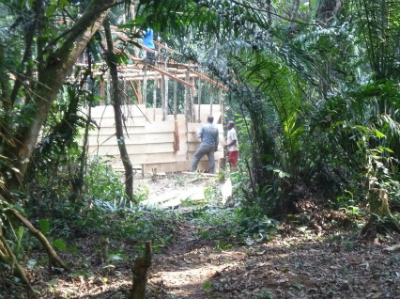 The Dian Fossey Gorilla Fund’s Grauer’s Gorilla Research and Conservation Program made significant progress this August in establishing infrastructure at the site of what is to be the program’s main base camp: Biruwe. The Democratic Republic of Congo (DRC) is home to the Grauer’s gorilla, a subspecies of east African gorilla. Unlike mountain gorillas, which have been studied in Rwanda at our Karisoke Research Center for more than four decades, little is known about Grauer’s gorillas because there are few habituated groups that researchers can observe. The Fossey Fund has been building a Grauer’s gorilla research program in DRC that will allow us not only to assess the numbers and stability of the current population in the region, but also to study and protect them.

The Dian Fossey Gorilla Fund operates three base camps in DRC, one in each of the three community-based reserves we work with — Reserve des Gorilles de Utunda et Watsa (REGOUWA), Reserve de Gorille de Punia (RGPU), and Conservation Communautaire pour la Reserve Forestiere de Bakano (COCREFOBA). From the camps inside each of these reserves, field staff patrol the surrounding forest, setting up temporary campsites in order to cover greater distances over several days. This year, the program’s goal was to confirm the presence of Grauer’s gorillas in the community reserves. Through regular treks in the forest, field staff have discovered nest sites, dung, and food remains that indeed indicate that Grauer’s gorillas are ranging in these areas. In fact, they believe they may have found a group of as many as 35 gorillas in REGOUWA!
The next phase of the program is to begin to identify specific gorilla groups, their sizes, and their home ranges. The Biruwe Research and Conservation Base will provide essential infrastructure for this phase, as it is centrally located to be accessible from the two other camps. For this reason, all data collected in the field will be stored in Biruwe and all the team leaders will meet there for technical and logistical assessment, planning, and to coordinate multi-team patrols. 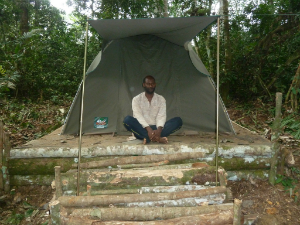 This August, the Fossey Fund’s Congo program staff, including Program Manager Urbain Ngobobo-as-Ibungu and GIS and Information Coordinator Escobar Binyinyi, spent 18 days in the forest of the REGOUWA reserve supervising the construction of the Biruwe base camp, which is named after one of the three rivers that border the site. Located in a very remote area of Congo, the camp is designed to be as self-sufficient as possible. From the Biruwe River, a pipe channels water into a tank that supplies modern shower and toilet facilities. The camp also has a large wooden warehouse for storage and a rondavel (traditional round, thatched structure) where camp staff will gather for meals and meetings. The staff will live in tents, but each tent will sit on an elevated stone platform and have a thatch roof to prevent flooding or leaks during heavy rains. Eventually, Biruwe will have solar power and a satellite internet connection which will connect with the Fossey Fund server at our main research facility in Ruhengeri, Rwanda. Field data will be processed in Ruhengeri to produce, among other analyses, GIS layers showing distribution and other demographic information about Grauer’s gorillas. Later, biological samples may also be brought to our labs in Ruhengeri for analysis.

The Dian Fossey Gorilla Fund is also working to create revenue sources for the communities who manage the reserves. Ngobobo-as-Ibungu describes these as “activities which can not only improve the livelihood of the community but also allow those reserves to become progressively financially independent.” One way that the Fossey Fund has already begun to channel revenue to the community is by hiring local people as field staff and as construction workers to build the camp. The construction work was particularly welcome because the new school year was approaching. The money helped families pay their children’s school fees and purchase the supplies the children needed to attend school. This kind of close work with the community provides the Fossey Fund with an opportunity to communicate about our work and to create an exchange between the organization and the community that can help ensure that our conservation efforts are sustainable. 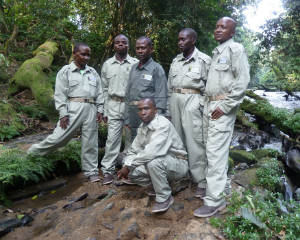 The construction of the Biruwe Research and Conservation Base was not only about building crucial material infrastructure for our Grauer’s gorilla program, it was also about strengthening our human infrastructure — the relationship between ourselves and the people living around the community reserves. This is essential to conservation efforts anywhere, but particularly in the DRC, which is politically unstable. Informal networks for exchanging information about security are especially necessary for working under these conditions. The Fossey Fund’s Congo program staff have been very successful in building these relationships over time, and projects like the construction of the Biruwe base will continue to strengthen and expand them.

We are very pleased to be able to share the progress made this summer in DRC and are looking forward to the team’s continued success in establishing this important and pioneering Grauer’s gorilla research and conservation program.