Pablo’s group is the largest mountain gorilla group ever studied, and has added much knowledge to the long-term behavioral and monitoring studies done by our Karisoke Research Center. Last month, the largest mountain gorilla group became even larger, with the birth of a new infant. On March 9, Mitimbili, an adult female in this group, was observed holding a brand new infant, which had been born since the previous day’s monitoring. 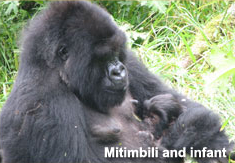 Mother Mitimbili, whose name means “hill” in the Kinyarwanda language (since she was born near the summit of a hill in Volcanoes National Park) was born on May 15, 1996. Her mother is Mukecuru, a name that means “founder/old woman” in Kinyarwanda and chosen in honor of Dr. Dian Fossey. Mukecuru entered Pablo’s group in April 1995, transferring from Susa group. When she was first observed by Karsioke researchers, she was assumed to be an adult but her reproductive history is unknown. Mukecuru is also the mother of Umwe and Isura. Umwe is an adult female who transferred to Susa group after an interaction with Pablo’s group. Isura is a juvenile female. Mukecuru also had another infant who unfortunately died a few days after birth. 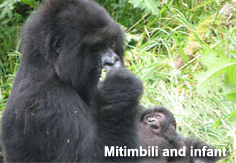 Currently, Mukecuru’s family (with the exception of Umwe) are all in Pablo’s group. Mitimbili has a juvenile male in the group as well, a healthy 4-year-old male named Ubwuzu. It will be interesting to watch how Ubwuzu interacts with his new sibling.

So far, the new infant seems to be doing well. Mitimbili is very protective of the infant, making it difficult to observe at the moment, but the researchers and trackers of Pablo’s group will continue to observe Mitimbili and her new infant on their daily patrols. As for now, we can happily say that Pablo’s large group has increased from 46 individuals to 47 thanks to this new addition!