Fossey Fund staff are delighted to report that 17-year-old female mountain gorilla Muganga, from Isabukuru’s group, and her new infant born on May 21, are doing well. Since the birth of her new infant, Muganga has displayed confidence in her parenting abilities, as she has been exposing the infant openly while breast feeding. Dominant silverback Isabukuru has been staying very close to Muganga and the new infant, protecting both vigilantly. 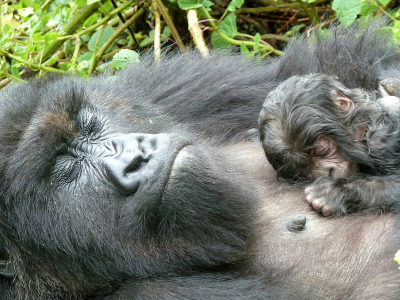 Muganga is the daughter of Umuhanga, and was born on March 26, 1996, into Susa’s group, where she lived until she was 11 years old. In June 2007 Muganga transferred to Pablo’s group together with three other females during an encounter between the two groups, but she only stayed in the large group for one day. When Muganga left Pablo’s group, she followed silverback Isabukuru. Two other adult females, Icyizere and Muntu, also transferred from Susa’s group with Muganga, and followed Isabukuru too.

Muganga did not stay with Isabukuru for long either — she moved to Kuryama’s group only a month afterwards. While in Kuryama’s group, Muganga gave birth to her first infant, on April 7, 2008, a female later named Rugira. However, in June 2011 Muganga returned to Isabukuru’s group, leaving the then 3-year-old Rugira in Kuryama’s group, who was then adopted by dominant silverback Kirahure. It is unclear as to which silverback is the father of Rugira, as the calculation of the gestation period falls exactly in the timeframe of Muganga’s transfer from the Isabukuru group to the Kuryama group. DNA analysis will hopefully provide these answers soon. Muganga’s new infant is already taking after the mother, and is quite large for one so young. Both mother and infant are doing well, and the infant seems very comfortable in Muganga’s big, warm embrace.