The Fossey Fund works closely with the community of Bisate in Rwanda, an area that is important because of its close proximity to Volcanoes National Park and the mountain gorillas. Many Fossey Fund trackers and their families live in Bisate as well. Our community work includes helping the local health clinic, which serves more than 19,000 people. A crucial part of this assistance was provided by Atlanta obstetrician/gynecologist Mary Horder, M.D., who traveled there extensively to help with staff training and medical care.

When Dr. Horder passed away in 2014, the Horder family and the Fossey Fund joined together to construct a maternity ward, which was critically needed at the clinic in order to provide care for new mothers and infants in an area separate from sick patients. The ward is the first of its kind in this village and will provide both prenatal and postnatal health services. 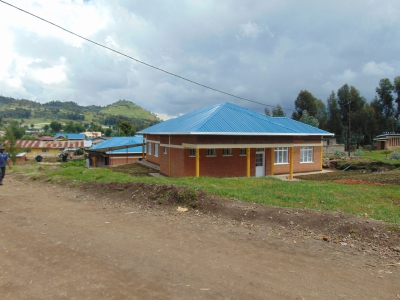 On Dec. 10, a team composed of two Fossey Fund staff members, the local contractor and supervisor, the district health monitoring officer, and the head of the Bisate Clinic proceeded to provisional reception of the new maternity building, with construction work now completed. It is hoped that the facility will be ready to open early next year.