Central to the Fossey Fund’s integrated approach to conservation are our community health programs. Humans and gorillas share many qualities, including the tendency to contract similar diseases and infections. By being able to provide adequate health care to individuals in villages near the gorillas, both people and the gorillas are able to thrive. The Fossey Fund has supported the Bisate village for more than 10 years, an area that is important because of its close proximity to Volcanoes National Park and mountain gorillas. Many Fossey Fund trackers and their families live in Bisate as well. For these reasons, the Fossey Fund began partnering with the Bisate Clinic in 2006 to improve work conditions, lead staff training and aid with infrastructure advancements. As part of our work with the clinic, Atlanta OB-GYN Mary Horder, M.D., traveled there extensively to help improve the health and quality of life of the people of Bisate. 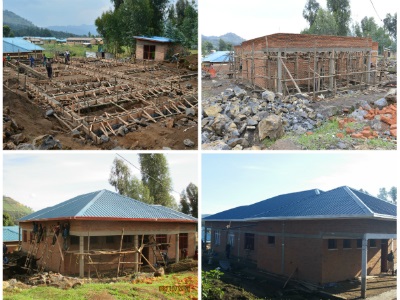 Dr. Horder passed away in 2014 after being diagnosed with cancer. She was the wife of long-term Fossey Fund board member Rick Horder, who serves on the board’s executive committee and has also served as board chairman.

With hopes of advancing both human and conservation needs and in honor of Dr. Horder’s work, the Fossey Fund and the Horder family are now partnering on a maternity ward construction project at the Bisate Health Center. The ward is the first of its kind in this village and will provide both prenatal and postnatal health services. Most critically, it will provide care for the new mothers and infants in an area separate from sick patients in the clinic.

The idea of a new maternity ward was raised during a meeting in 2014 among Fossey Fund and Bisate Health Center staff, where it was decided that having a new, modern ward was a priority need. Like much of Rwanda, Bisate faces dramatic population growth. Reports indicate that the current net population density is 749 inhabitants per square kilometer in the Musanze district, where Bisate is located, says Fossey Fund Ecosystem Health and Education Program Manager Ildephonse Munyarugero. Indeed, Rwanda ranks as the most densely population country in Africa.

The maternity ward and increasing births

The new maternity ward will also incorporate a family planning service into its facility, intended to teach about birth management and provide contraceptive methods. It is anticipated that this aspect of the ward will lower population growth and therefore reduce the current pressure on forest resources.

“Putting a maternity facility at the Bisate Health Center is an unprecedented integrated approach that recognizes the interconnection between people’s needs and conservation needs. The maternity clinic will operationalize the Fossey Fund’s motto- ‘Helping people. Saving Gorillas,’” Munyarugero said.

The Bisate Health Center currently serves 19,135 individuals, and an average of 46 new infants are born there every month. According to a study by the Fossey Fund and Emory University in 2013, there were approximately 4,000 women of child-bearing age in Bisate, and there are about 700 pregnancies each year.

Upon the building’s completion in December 2015, it will be dedicated to Dr. Horder, who first arrived in Rwanda in Sept. 2007 as a medical volunteer. After that first visit, the retired OB-GYN traveled to Bisate at least twice a year to train health center staff on various medical topics, such as patient consultation techniques and clinical data recording. 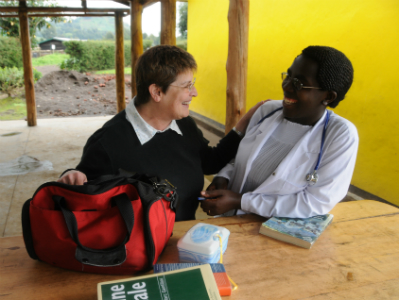 "Mary loved Rwanda and its people and felt privileged to work at the Bisate Clinic. The Horder family is grateful and honored to assist with the construction of this new maternity ward," Rick Horder said.

Dr. Horder, who made her last visit to Bisate in 2011, is remembered by staff for her enthusiasm and positivity during her time helping at the health center. Her work greatly helped improve standards in primary health care and increased the utilization of modern health care in Bisate.

While the previous maternity ward lacked space and privacy, the new ward will house a reception, separate rooms for labor, delivery and post-partum, nurses’ stations, a store, bathrooms and hand-washing areas.