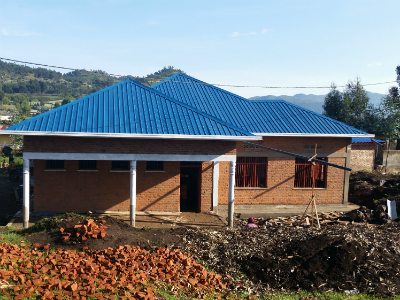 The Fossey Fund works closely with the community of Bisate in Rwanda, an area that is important because of its proximity to Volcanoes National Park and the mountain gorillas and that is home to many trackers and their families. Our community work includes helping the local health clinic, which serves more than 19,000 people. A crucial part of this assistance was provided by Atlanta obstetrician/gynecologist Mary Horder, M.D., who traveled there extensively to help with staff training and medical care.

When Dr. Horder passed away in 2014, the Horder family and the Fossey Fund joined together to construct a maternity ward, which was critically needed at the clinic in order to provide care for new mothers and infants in an area separate from sick patients. The ward is the first of its kind in this village and will provide both prenatal and postnatal health services. The new maternity ward will also incorporate a family planning service into its facility.

In December, a team composed of two Fossey Fund staff members, the local contractor and supervisor, the district health-monitoring officer, and the head of the Bisate Clinic arranged a reception of the new maternity building, with construction work now completed. During the reception, the district health-monitoring officer thanked the Fossey Fund for this novel contribution to the local health sector. The officer also expressed hopes that the facility will remain a place pregnant women want to go.

The facility is expected to open early this year and will be open to the approximately 4,000 women of childbearing age in Bisate, where there are an average of 700 pregnancies per year.

Since 1998, the Fossey Fund’s ecosystem health program has included intestinal parasite treatment, hygiene education, clean water access and more. The parks where the gorillas are protected are surrounded by communities of people whose poverty and poor health create threats to them, to the animals and ecosystem shared by both.