A recent paper published in the journal Zootaxa, describes two new genera of moths (from the family of moths called Metarbelidae), found in the northeastern region of the Democratic Republic of Congo. Author and scientist Ingo Lehmann, of the University of Bonn, explained in his paper that he named the new genus “Dianfosseya,” to “honour her love and life work for Africa and for showing the whole world her detailed long-term field studies on the mountain gorillas…." 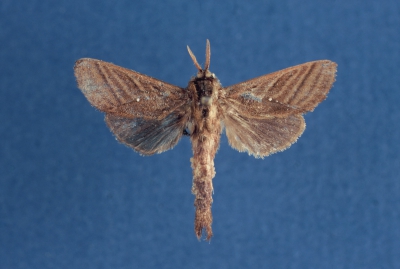 Dian Fossey is in good company in terms of new moth names. While Lehmann named the new genus Dianfosseya, he named the specific species after famed scientist Louis Leakey, resulting in the name "Dianfosseya leakeyi.” It was Louis Leakey who inspired and encouraged Fossey to begin her study of the mountain gorillas. In addition, a second genus was named after Jane Goodall (Janegoodallia­).

Lehmann stresses the importance of describing such species, which are probably endemic to this eco-region and can be threatened by the ongoing fragmentation of many forests there. There is minimal knowledge of the larger order (Lepidoptera) of insects there that includes these moths. The family of moths (Metarbelidae) is a characteristic one on the African mainland, with at least 550 species, says Lehmann. In contrast, fewer than 30 known species exist on Madagascar, southern Arabia, India, Nepal and southeast Asia combined.