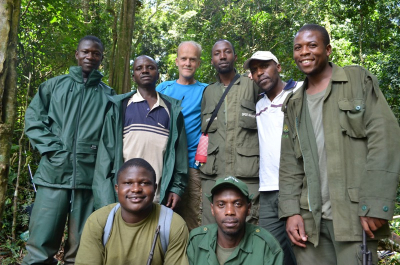 The 2011 census – the fourth conducted in the park's history – is being led by the International Gorilla Conservation Programme (IGCP), along with the Max Planck Institute for Evolutionary Anthropology and the Uganda Wildlife Authority. The census will employ the indirect sweep method, where night nests will be counted to generate a current estimate of the population.

“The results of the 2011 Bwindi census will not be known until late in 2012, as it takes at least nine months to analyze all of the genetic samples and cross-check them with the results from the six-week sweep of the forest, which is currently underway,” stated IGCP’s Field Communications Officer Anna Behm Masozera. She adds that if security allows, IGCP and partner organizations hope to include the mountain gorillas in Sarambwe Nature Reserve, Democratic Republic of Congo in the Bwindi census, as the two parks are contiguous and the mountain gorilla population crosses national borders.

The Bwindi census is a considerable undertaking, requiring collaboration from many governmental and non-governmental organizations in the region. Participants include: the Ugandan Wildlife Authority; the Institut Congolais pour la Conservation de la Nature; the Rwanda Development Board; the International Gorilla Conservation Programme (a coalition of the African Wildlife Foundation, Fauna & Flora International and the World Wide Fund for Nature); the Max Planck Institute for Evolutionary Anthropology; Conservation Through Public Health; the Mountain Gorilla Veterinary Project; the Institute for Tropical Forest Conservation; and the Dian Fossey Gorilla Fund International. Funding for the census was provided by the World Wide Fund for Nature-Sweden, Berggorilla & Regenwald Direkthilfe and the Wildlife Conservation Society.

Each of the organizations involved has donated staff members to participate in the six-week data collection sweep of the forest. During the pre-census training period, the participating staff, comprised of various men and one woman from the Ugandan Wildlife Authority, were briefed on important field techniques such as night nest counting and recording, fecal sample collection, and the use of compasses and GPS systems, as well as first aid training by local Bwindi Hospital staff.

They were divided into six teams of six, and on Sept. 10th set out to systematically trek through hundreds of kilometers within Bwindi National Park, moving east to west. Throughout the sweep, the teams will track the gorilla’s trails, count their night nests and collect fecal samples for genetic and pathogenic analysis, spending the nights in the forest at different campsites in the coming weeks. Data collection is expected to continue through Oct. 22. 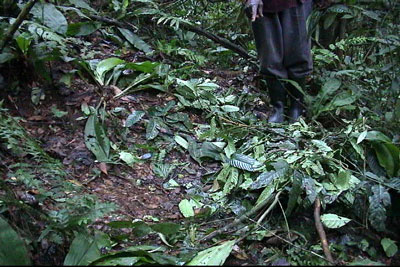 Gorilla groups can travel a significant distance during the day’s foraging and they must build a new nest out of vegetation every night. Therefore, the technique of fresh nest counting is considered an effective method for population estimation. Additionally, genetic analysis of the fecal samples collected from the night nests will ensure that the team is not under-counting or double-counting individuals. In fact, according to IGCP, this will be “the second time genetic analysis will be used as a census tool with the Bwindi population. Results from the last census in 2006 yielded 302 genetically-unique individuals, whereas the indirect sweep method (nest counting) yielded 336 individuals. In that case, it was determined that some of the gorillas were making more than one nest a night, and several groups and solitary males were counted more than once as different individuals. The genetic verification ensures that this potential double-counting does not occur during the analysis of the results.”

In addition to aiding in a more accurate population count, the fecal sampling will also allow for conservation partners to develop a general snapshot of the health condition of the entire Bwindi gorilla population, and compare it to their findings in 2006.

In the past, there has been much debate about the Bwindi gorillas’ classification. Veronica Vecellio, Karisoke’s Gorilla Program manager, explained that the Bwindi population is of particular interest to primatologists because “they exhibit enough ecological and morphological differences from both Grauer’s gorillas and Virunga mountain gorillas that they could one day be classified as a separate subspecies.”