During the past several weeks, Fossey Fund trackers as well as those from the Rwanda park authorities (RDB), have been observing an interesting development and doing some good detective work. A 14-year-old silverback named Iyambere, who left Pablo’s group (where he was born) almost two years ago and became solitary, returned on March 21 and interacted with Pablo’s group. At this point, he was accompanied by a female named Izuru, who came from Susa-2 group (a group monitored by RDB for tourist visits). 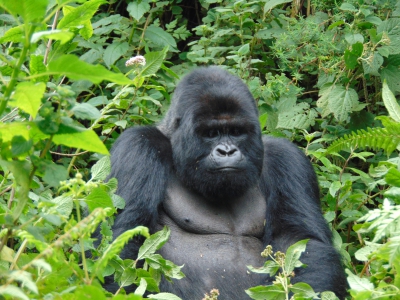 Confirming the identity of Iyambere took some time, visits by various staff, and comparisons of photographs, since he had not been seen in several years. In the end, Iyambere was positively identified and had acquired two females. One is the elderly Izuru (with an estimated birthdate of 1978) and the other is 12-year-old Turimaso, who comes from Pablo’s group. Then, on March 27, another interaction took place between this newly formed group and Pablo’s group, but Iyambere was able to keep the two females.

Iyambere comes from an impressive maternal line that traces back to a matriarch gorilla named “Effie.” There are now four dominant silverbacks from this family line that we monitor at Karisoke. One of them is Cantsbee, who still leads Pablo’s group today. And so, we now have a new group to monitor!