A new orphan gorilla infant arrived in the night on Sunday, August 7, at the care facility in Kinigi, Rwanda operated by the Dian Fossey Gorilla Fund International and the Mountain Gorilla Veterinary Project (MGVP). The newcomer is a female mountain gorilla about one year old, confiscated from poachers by Rwandan police in the town of Giseny, at the border with the Democratic Republic of Congo (DRC). 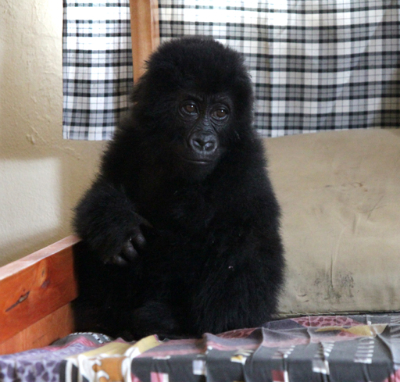 “The gorilla is well enough, she is not afraid of humans, although she is very traumatized and underweight." says Felix Ndagijimana, deputy director of the Fossey Fund’s Karisoke™ Research Center in Rwanda. Ndagijimana saw the new infant Monday morning, as Jean De Dieu ﻿﻿Ngilira, a Fossey Fund gorilla caregiver, arrived to take care of her and feed her fruits, vegetables, and forest vegetation.

“The young gorilla was poached on August second at Bukima, on the Congolese side of the border in Virunga National Park, but arrived in Rwanda on August third,” says Ndagijimana. “One Congolese and two Rwandans have already been arrested, but apparently more people are involved and police invetigations are ongoing.” Ndagijimana went to Giseny to meet with the principal organizations involved in the gorilla confiscation, including the MGVP, the Rwandan Development Board and the Congolese park authority (ICCN).

The young gorilla will be cared for in Kinigi during a quarantine period of one month, after which she will be transferred to the ICCN’s Senkwekwe sanctuary in the DRC, which harbors other orphaned mountain gorillas that had formerly been cared for by the Fossey Fund and the MGVP in Kinigi. Several Grauer’s (eastern lowland) gorillas that are native to a different forest further west in the Congo have also been turned over to the facility in Kinigi in the past but are now with other Grauer’s gorillas at the Gorilla Rehabilitation and Conservation Education (GRACE) center in a rural area of the DRC, where they are being prepared for eventual release to the neighboring forest.