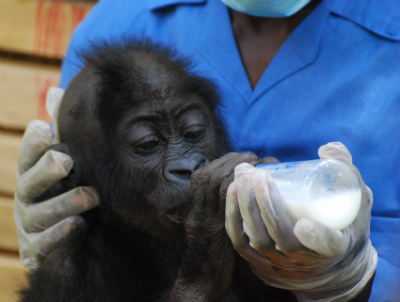 Half an hour before nightfall on Friday evening, the doors of the wooden cage opened and infant gorilla Lubutu stepped out for the first time in Goma. After a few months’ ordeal in captivity before being rescued from poachers and then long travels by road and air, the latest confiscated Grauer’s gorilla in eastern DRC had finally made it to a safe place, where he could start receiving appropriate care.

Estimated to be around two years old, Lubutu was named after the town where he was rescued on March 21 in a delicate operation orchestrated by the Congolese park authority (ICCN). Four people were reportedly arrested as they were preparing to sell the infant.

A few days later, Dr. Eddy Kambale of the Mountain Gorilla Veterinary Project, and caregiver Faustin Kighoma traveled to Lubutu to give the orphan immediate assistance and help transfer him to Goma.

“We were struck by his very skinny appearance and severe hair loss, but we could get him to come to us and slowly begin to trust us,” says Dr. Eddy. “No wonder, though, that he was in such a bad shape, considering all the stress he must have gone through and the very inappropriate diet, consisting of human foods, such as salted fish and cassava. Lubutu is also an extremely hot and humid place, so the infant was suffering from the heat and dehydration as well.” 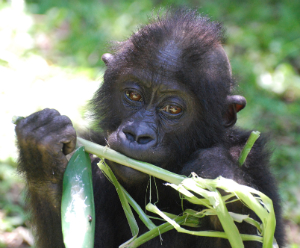 At Goma, the gorilla is now housed in the backyard of our local partner association UGADEC and is cared for under the supervision of Sandy Jones, the Confiscated Gorilla Program manager at GRACE (the Gorilla Rehabilitation and Conservation Education center). GRACE will become Lubutu’s next home once he clears the full medical exams that will be administered early next week.

At first glance, and despite his weakness, the infant seems to be in good health. He does not present any external injuries – not even scars around the hips from the ropes or wires that gorillas are usually tied up with when they are taken out of the forest. More importantly, he does not appear to be severely depressed.

“He does curl up in a fetal position a lot, as well as squat tightly and hold his head, which are all signs of depression related to separation anxiety and fear,” explains Jones. “He is visibly insecure and seeking the comfort of his caregiver, with whom he has a clear bond. However, he is alert, has a good appetite, and is curious about his new environment.”

At night, Lubutu sleeps together with Faustin in a tiny room, and as soon as day breaks he is outside in the garden, where he curiously absorbs all sights and sounds around him. He drinks formula diluted with water every hour and is trying out various other foods, such as peanuts, fruit and aframomum (a favorite gorilla plant food). Slowly he is also being introduced to sosoma, a local blend of sorghum, soy and maize, which is very high in vegetable protein — the main nutrient in a wild gorilla diet. Although sosoma will help him gain strength and build muscle tone, the whole feeding process is carried out with a lot of caution, so that the infant’s stomach can adjust to the new, healthy diet.

Jones hopes that when Lubutu is in better shape it will also be easier to give a more accurate estimate of his age. “He is definitely tall, and his hands and feet are quite large, but because he is so skinny he seems quite small. If I compare him to Ndjingala — the other two-year-old gorilla we have at GRACE — he appears to be extremely tiny and underdeveloped.”

Lubutu is the second Grauer’s gorilla infant to be rescued in the last three months in Eastern DRC, which brings the total number in our care to 12. After his one-month quarantine he will join the younger ones at GRACE to continue the rehabilitation process. Six older Grauer’s gorillas will also soon transfer to GRACE, so that they can form a gorilla family that can be released into the wild. This will present many challenges to the GRACE staff, as they help the gorillas adjust to their new environment and to each other.