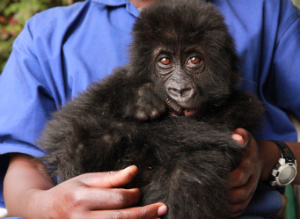 We are following the progress of the new mountain gorilla orphan with great interest. The new infant is a female, named Ihirwe. Ihirwe means "luck" in Kinyarwanda and certainly expresses our wish for her. She was confiscated from poachers on August 7 and brought to the facility operated in Kinigi in partnership with the Mountain Gorilla Veterinary Project (MGVP).

The MGVP veterinarians have been with Ihirwe many hours each day, because she was sick and of course stressed when she arrived. Jean De Dieu Ngilira and another caretaker are taking turns spending the night with her, providing comfort. Jean De Dieu says she is getting accustomed to her new environment, and the vets report that she is recovering from a few episodes of coughing. On August 11 when I visited she was doing extremely well, had a good appetite and looked healthy and fluffy.

Less than a year old, Ihirwe still depends mainly on milk, but is drinking some fruit juice and eating bananas, cucumbers and the local baby food called sosoma. The Karisoke field staff also provided food from the forest that she would be familiar with, mostly wild celery, which she has taken a few bites of.

We have not received a mountain gorilla for a few years. The orphans formerly in Kinigi who recently moved to GRACE are Grauer's gorillas. Four mountain gorillas that had been cared for in Kinigi for several years are now in Senkwekwe, a new facility operated by the Congolese park authorities (ICCN) in Virunga National Park. Ihirwe will eventually join them at Senkwekwe, following a month’s quarantine in Kinigi.