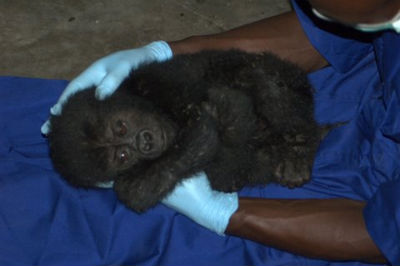 An approximately 6-month-old male Grauer’s gorilla infant confiscated from poachers in the Walikale area of the Democratic Republic of Congo has just arrived at our temporary care facility in Goma.

The negotations for obtaining and then confiscating this gorilla were extensive and required the expertise of several Fossey Fund staff, as well as Mwami Alexis Kalinda, executive secretary of a group of community-based nature reserves in Congo (called UGADEC). It started with information provided by a local Congolese man who volunteers for UGADEC, reporting that an infant gorilla had been captured by poachers in the forest of one of the UGADEC reserves and had been brought to a mining village in the Walikale territory. After detailed preparations, the Fossey Fund's Dieudonne Changwi flew to Walikale to fetch the gorilla but met with many obstacles before obtaining a flight out to Goma with the infant gorilla on the night of Dec. 29.

Once arrived in Goma, the gorilla was examined by Dr. Eddy Kambale of the Mountain Gorilla Veterinary Project. Dr. Eddy reports that upon first examination the gorilla seemed strong, though stressed and moderately dehydrated, with a wound on his hip, probably caused by a rope with which he was restrained by his captors. However, he took some milk, was moving around well and was sleeping this morning. The Fossey Fund has hired special caregivers for the infant, who will be with him 24 hours per day.

Infant gorillas confiscated from poachers have undergone a severely traumatic experience and usually suffer from a number of medical problems due to maltreatment and poor diet while in captivity. They must be kept in a quiet and secure location, away from noise and contact with humans other than trained caregivers. Everyone involved in caring for the quarantined orphan must wear clean coveralls, a mask and gloves, and boots that have been disinfected with bleach. The infant is never left unattended, and receives a special age-appropriate diet. Infants under six months old are given warm milk and baby formula, while those over six months can have solid food, preferably vegetation from the forest but when necessary fruits and vegetables from the market. Caregivers must also attend to the orphan’s psychological condition, allowing him to rest quietly for at least two days and bond with them before taking him into a secure outdoor area during daylight hours. The caregivers even sleep next to the infant while he sleeps, just as his mother would.

After a one-month quarantine period and further medical and psychological care as needed, it is hoped that the young gorilla will be ready for transfer to the new Gorilla Rehabilitation and Conservation Education (GRACE) center in a rural area of the Congo. There, he will join other confiscated gorillas that are learning to live in the forest as a group in preparation for eventual release to the wild. GRACE was initiated by the Fossey Fund, at the urging of the Congolese national park service (ICCN) with funding from the U.S. Fish and Wildlife Service, and design and construction assistance from Disney's Animal Programs. The Fossey Fund and the Walt Disney Company are the first of several partners that will continue long-term funding and operation of the center.

Mwami Alex reports that the gorilla has been given the name "Kyasa." Kyasa is the name of a river that separates three of the UGADEC nature reserves in Congo.