Nearly 50 years of studying gorillas at our Karisoke Research Center means we have observed the gorillas doing a variety of different things, and have come up with many ways to evaluate their behaviors, health and even their personalities. This research helps us provide key information for developing effective conservation strategies, and to answer critical questions about the gorillas, their behavior, and their ecology.

Two such studies published recently in scientific journals were especially interesting, with one focusing on stress levels in gorillas and the other describing several occurrences of rare group violence among the gorillas. Both are important to understanding potential implications of the recent gorilla population growth, which has occurred without any increase in available habitat. 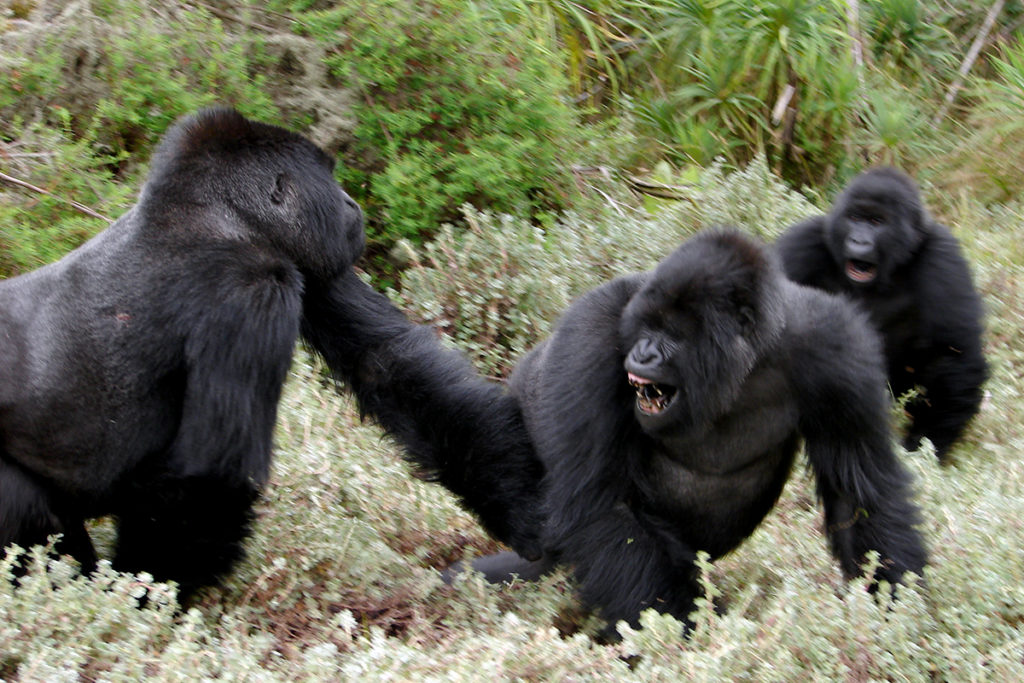 Finding clues to stress in gorillas – through fecal samples

Even though the mountain gorillas of Rwanda live in a protected forest, they are surrounded by one of the highest human population densities in Africa and are subject to a variety of pressures, both natural and human-induced, which may affect their health. These can include encounters with poachers and getting caught in snares, which usually requires veterinary interventions to save their lives; interactions with neighboring groups or solitary males; ranging at high altitudes with harsh weather conditions; and even ranging out of the park, which can put them in close contact with local human populations.

Any of these types of stress can potentially affect the success of this critically small population. But how can stress in gorillas be detected reliably? The Fossey Fund’s research manager at Karisoke, Winnie Eckardt, Ph.D., has been studying this question for years and has recently published, along with research partners, a paper in the journal “Conservation Physiology,” that validates a non-invasive method of detecting physiological stress in gorillas: analyzing the metabolites of stress-related hormones.

Over the course of about 18 months at Karisoke, Eckardt and trained field staff collected behavioral data and fecal samples for hormone and parasite analysis from 127 mountain gorillas, and then Eckardt spent a year analyzing the data, to confirm that this method works.  We are now examining how the gorillas react physiologically to the various potential stressors they face, including environmental changes as the population grows within the limitations of the park, with the goal of helping to answer important conservation management questions.

In a new paper just published in the journal “Scientific Reports,” by Karisoke alum Stacy Rosenbaum, Ph.D., along with our CEO/Chief Scientist, Tara Stoinski, Ph.D., and Gorilla Program Manager Veronica Vecellio, attention was focused on several cases of rare attacks by gorilla groups upon outside silverback “intruders.”

This kind of “mob” behavior has been documented in chimpanzees and, of course, in humans, but only a few cases, as described in this study, have been see among the gorillas. No one knows the reasons, but since the mountain gorilla population has been growing due to intense protection efforts, so have the sizes of their groups, the numbers of males in groups, the density of groups in certain areas, and other factors that could lead to behavioral changes.

Rosenbaum and other scientists think these attacks are worth studying both for the sake of gorilla conservation management, and to compare with behaviors in other primates, especially chimps and humans.

“This really emphasizes the importance of long-term observation of animals that have long life spans, as gorillas do,” says Rosenbaum. “With a population that’s been studied for 50 years, such as the Karisoke gorillas, it’s easy to forget that we still have a tremendous amount to learn about the flexibility in their behavior, or what we might see due to changes in their social or ecological environment.”