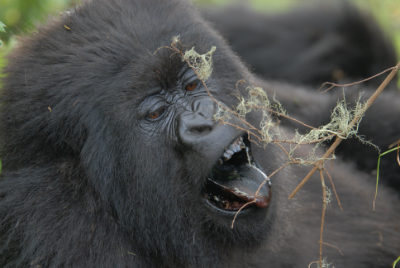 A new study looks at changes in the abundance and distribution of the mountain gorillas’ favorite food plants in selected areas of Volcanoes National Park over a 20-year period, to shed light on the resources available to the growing gorilla population. The authors note that although the Virunga gorilla population doubled since the 1970s, this is the first study of how this change in density may have affected changes in their food supply during the past 20 years.

The study, “Long-term Temporal and Spatial Dynamics of Food Availability for Endangered Mountain Gorillas in Volcanoes National Park, Rwanda,” appeared in the latest issue of the American Journal of Primatology. The project was led by Cyril Grueter, Ph.D, a post-doctoral researcher with the Dian Fossey Gorilla Fund International and the Max Planck Institute for Evolutionary Anthropology. A number of other Fossey Fund staff participated in the study, including Katie Fawcett, Ph.D., former director of the Karisoke Research Center, Ferdinand Ndamiyabo and Didier Abavandimwe. The study was a collaborative effort between the Fossey Fund and the Max Planck Society for Evolutionary Anthropology.

The Virunga gorillas depend on a small number of plant species, so conservationists are concerned that they may reach the limit of their food supply, or the park’s “carrying capacity.” While they did not find definitive answers to questions about the relationship between the gorillas and their food sources, the study yielded findings that suggest the importance of continued monitoring of these plants to help conservation planning

The researchers surveyed a 6 km2 area to measure the biomass of five foods that make up roughly 70 percent of the gorillas’ diet: gallium, thistles, wild celery, nettles and blackberries. The results were compared to those of surveys done on the same plant species in the same portion of the habitat in 1988 and 1989. Researchers anticipated an overall decline in plant biomass from overharvesting by the gorillas, but declines were only observed for two of the five species and the other three species actually increased in biomass. Gallium, which is the food species most consumed by gorillas, declined in biomass by 50 percent. Although the results are mixed, they demonstrate that the plant composition of the forest is changing, perhaps as a result of the increased number of gorillas, and the need for continued monitoring.

“Having a long-term research presence at Karisoke enables us to do this kind of study, which provides data that are incredibly important for the long-term conservation of the gorillas,” says Fossey Fund Vice-president and Chief Scientist Tara Stoinski, Ph.D. “Our plan is to continue monitoring vegetation changes in the gorillas’ habitat at roughly five-year intervals.”

The authors observe that the gorillas monitored by Karisoke have incorporated new species of plants into their diet since the first studies were conducted in the 1970s, so they may be able to adapt to changes in the availability of the foods they currently favor. Only further observations will tell.