Like people, animals show a wide variety of personalities, and when it comes to great apes and other non-human primates, knowing more about them is particularly interesting. In addition to understanding why certain personality types have evolved, such knowledge could also inform how personality affects critical aspects of an animal’s life, such as mortality patterns, reproductive success, and mate choice. 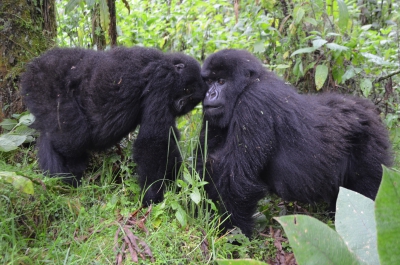 But how can gorilla personalities be studied? With people, scientists can use various tests (think of the famous Rorschach ink blot test), run experiments, or ask subjects to fill out questionnaires. For gorillas it’s a bit of a different challenge, yet in a study recently published by a number of Fossey Fund scientists, gorilla personalities were actually rated by using detailed questionnaires very similar to those used in human studies!

These were special, detailed, standardized questionnaires developed specifically to study non-human primate personalities, and the raters were experienced gorilla observers with training in collecting data on gorilla behavior. Led by Fossey Fund scientist Dr. Winnie Eckardt, the study (which was published in the Journal of Comparative Psychology) included eight raters, ran for seven months, and resulted in 556 ratings of 116 mountain gorillas that are routinely monitored by the Fossey Fund.

The main goal of the study was to describe the personality structure of these mountain gorillas based on particular dimensions, which the scientists called: dominance, openness, sociability, and proto-agreeableness. A gorilla high on dominance is a socially high-ranking individual, intelligent, decisive but also protective, helpful and sensitive – the wise leaders and protectors. Gorillas who rate high on the open dimension love to explore, are creative, impulsive, active, emotionally less stable and lack caution – the adventurer and daredevil types. Sociable gorillas are characterized by a high desire to interact with other gorillas, and show high levels of sympathy, affection and gentleness. Those who scored high on proto-agreeableness (similar to human agreeableness) are friendly, emotional stable and content – the “oases” of calm and peace.

However, when scientists try to assess animal personality, it is important to avoid projecting our own feelings and interpretations of the animals’ behaviors. One way to test this reliability is to associate the personality dimensions with certain observed behaviors. Our scientists did this using the long-term behavioral data collected by the Fossey Fund over past decades. For example, we found that gorillas ranked high in sociability groom other group members more often than gorillas assessed low in sociability. 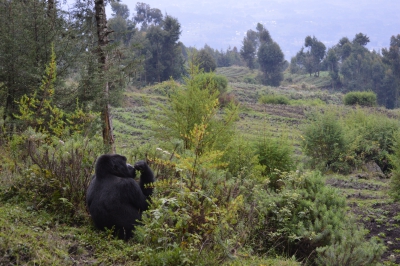 Since standardized methods were used, the results of this study could also be compared to those from studies on other apes, such as chimpanzees and orangutans. The findings suggest that differences in personality among apes, including humans, may reflect adaptations to their society and environment in order to optimize success and survival. For example, openness has been identified as a personality trait in humans, chimpanzees and gorillas, but not in orangutans. Orangutans are the only apes living solitary lives, as opposed to life in social groups. Openness may therefore be an important personality aspect for group-living primates with complex social structures but less important for the success and survival of a solitary-living primate such as the orangutan.
Other authors of the study included Fossey Fund President/CEO and Chief Scientific Officer Dr. Tara Stoinski, former Fossey Fund scientists Dr. H. Dieter Steklis and Netzin G. Steklis, Dr. Alison Fletcher and Dr. Alexander Weiss.