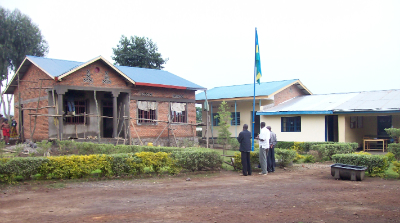 Within the next several weeks a new ward will be completed for Bisate Clinic, reports Ildephonse Munyarugero, manager of the Dian Fossey Fund International’s Ecosystem Health and Community Development program. The clinic serves some 29,000 people in the town nearest to the mountain gorillas’ habitat in Rwanda’s Volcanoes National Park. The new ward will allow women and female children to be housed separately from male patients, increasing privacy and reducing disease transmission. This is expected to encourage use of the clinic, which has grown significantly since the Dian Fossey Gorilla Fund began to rehabilitate the facility in 2006.
Munyarugero says that “with the Fossey fund’s addition of solar panels, safe drinking water (through harvesting rain water), mobile plastic toilets, staff training and salary subsidies, the 31 full-time clinic staff can look forward to a more highly functioning and successful facility.” And he doesn’t plan to stop when the new ward opens. Next, he has set his sights on rebuilding the dilapidated, mud-walled kitchen, constructing a fence to secure the property and connecting the clinic to an electrical grid to supplement the solar power.

Improving the wellness of people who share the gorillas’ ecosystem reduces transmission of disease from people to gorillas and helps people improve their wellbeing so they can participate in conservation. The Fossey Fund’s Ecosystem Health and Community Development program includes rehabilitation of rural clinics in both Rwanda and the Democratic Republic of Congo, and in Rwanda the Bisate Clinic is a major focus. Bisate is also Munyarugero’s home town. 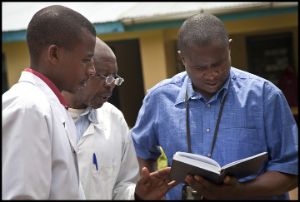 When he was a young boy, Munyarugero and his friends would watch as Dian Fossey, Ph.D. trucked through their village on her way to the former Karisoke™ Research Center site. Fossey was one of the few well-known expatriates in Bisate, renowned as the woman who lived with the gorillas. Ildephonse developed a special interest in Dr. Fossey and her work, saying “I always knew that one day I would somehow work with her organization.” It seems his intuition was correct, as he has successfully managed the program for nearly a decade.

Before joining the Fossey Fund, Munyarugero had worked with a number of humanitarian organizations following Rwanda’s 1994 civil war, including work with children affected by extreme poverty or HIV/AIDS. In 2002 a family friend and Karisoke’s director at the time, Liz Williamson, Ph.D., recommended Munyarugero to manage the organization’s newly formed Ecosystem Health and Community Development program. At that time, the Fossey Fund’s focus was growing beyond field research. Because the endangered gorillas are highly susceptible to human diseases, the Fossey Fund recognized that protecting the health of the surrounding human communities is a vital part of conservation. 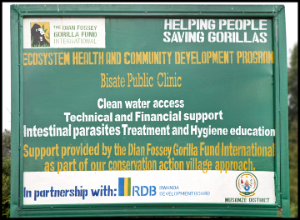 The program continues to evolve and expand under Munyarugero’s direction. For example, joining forces with the Kigali-based Rural Environment Development Organization (REDO) has recently allowed the Fossey Fund to become increasingly involved in agricultural projects for a historically marginalized community of people who live near the gorillas and traditionally subsisted on hunting in the forest.