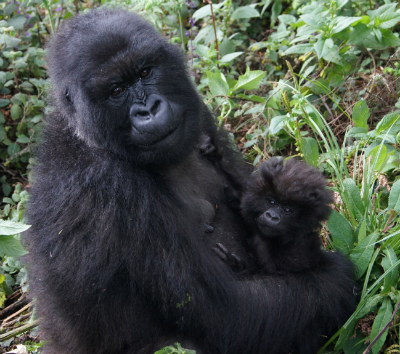 Every June for the past seven years Rwanda has held a gala naming ceremony for the mountain gorillas born during the previous 12 months, called “Kwita Izina.” This year’s Kwita Izina, held in Kinigi on June 18, named 21 gorillas, including those born in the groups monitored by the Karisoke™ Research Center.

Kwita Izina was adapted from a traditional Rwandan ceremony for naming children. In recent years it has grown to include a whole week of associated events celebrating gorilla conservation, such as a cycling tour, conservation seminars, a festival, and a soccer competition.

The theme of this year’s event was “community development for sustained conservation.” The Rwandan Development Board (RDB), which organized the celebration, estimates that about 800 people who live near Volcanoes National Park are involved in day-to-day park management activities. 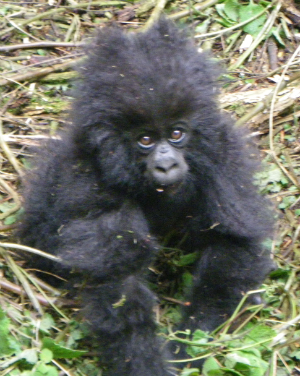 The gorillas’ names have special meanings in the Kinyarwandan language. The Karisoke infants included four born to females in Pablo’s group: Nyabitondore’s infant’s name, “Isangano,” means “crossroad” because the birth took place where the lowlands of Mudakama join. “Umwari” was named “young girl” because she is the first female born to Umuco, who has two sons. Gutangara surprised everyone when she gave birth only two years after her last time, so her infant was named “Gwira,” or “increase,” to express a wish for the continuing growth of the gorilla population. Afrika’s first offspring died before it could be named, so her new daughter was named “Indamutso,” which means “greetings,” signifying that the gorillas are God’s greetings from Rwanda to the world, according to the RDB.

In other groups, Kubaka’s infant, born in a period of heavy rains that caused the deaths of four other gorillas, was named “Urahirwa,” or “prospect,” expressing a wish that the Ntambara group will have a great future. The infant born to Bukima was named “Nikuze,” or “grow up,” in hopes that it will survive, because Bukima’s previous infants died from various causes. Ikaze gave birth for the first time to a son now named “Sakara,” which means “known everywhere,” a wish that the story of gorilla conservation will be known world-wide. Finally, Faida also gave birth after losing a previous infant, so her newborn was named “Susuruka,” which means “be pleased.” 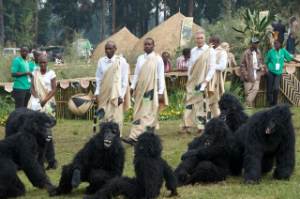 “This year’s Kwita Izina was well attended by the local community, Rwandan government officials, foreign dignitaries, friends of Rwanda and the Rwandan and regional conservation community,” reports Karisoke Deputy Director Felix Ndagijimana, “The guest of honour was Rwanda’s prime minister, Bernard Makuza, who was the first to name a gorilla. The Fossey Fund was also well represented, by trackers, researchers and our guests from the United States. The Fossey Fund was mentioned in one of the categories of sponsors (Bronze) and thanked for sponsoring the Kwita Izina Soccer Competition.” 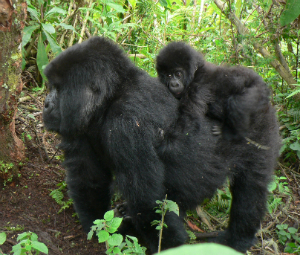 The prime minister thanked all the partners, especially the people of the Musanze district, which is next to the park. He recognized the efforts of the communities in contributing to mountain gorilla conservation, which has become a catalyst for the conservation of the rest of Rwanda’s biodiversity. He also recognized the park authorities’ and conservation NGOs’ contributions to improving the livelihoods of the local communities.

Filanthropists.com has created a special limited edition t-shirt that commemorates the infant gorillas born at Karisoke in the last year. Only 200 shirts will be made available to the public. Filanthropists.com, designers of the shirt, will donate $20 from each sale to the Dian Fossey Gorilla Fund. Get yours today.