The infant just born in Urugamba's group has been observed to be a male. Mother Bishushwe is taking good care of him, holding him carefully and protecting him from the cold. This is Bishushwe's sixth offspring, so she is very experienced. 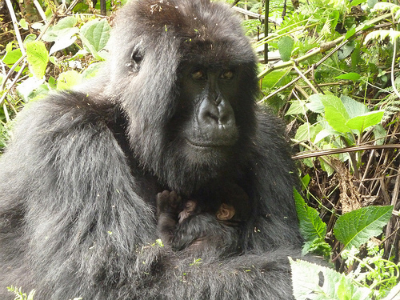 In other gorilla groups, Titus group is still dealing with lone silverback Gwiza, and the ongoing interactions are tiring out the group. Gwiza is focused on female "Fat" from the group, though she is trying to avoid him.
Kuryama's group is really of concern now, as they are repeatedly coming outside of the park. Fossey trackers are able to herd them successfully back into the forest, but then the group comes out again shortly thereafter. This is resulting in the need to provide protection all day and all night as well, to protect both gorillas and the community.
Veronica