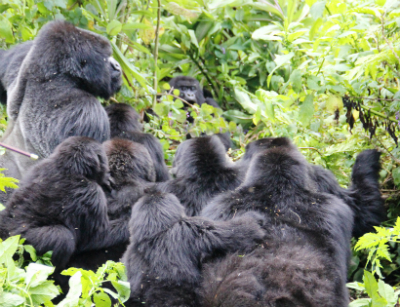 Today, Ntambara’s team found most survivors of Urugamba’s group — female Pasika, her two offspring, and Bishushwe’s juvenile son, Igisubizo — with Ntambara’s group, a sign that the two groups are indeed merging, five days after Urugamba’s death. Only female Bishushwe remained at a distance, probably trying to protect her vulnerable infant from infanticide by staying away from the silverbacks.

In other news, Giraneza’s group was seen Jan. 29 for the first time since November. Giraneza was still with females Nyandwi and Taraja. However, Nyandwi seems to have injured her left arm, so veterinarian Jean Felix Kinani from Gorilla Doctors will assess her injury tomorrow. On the way out of the forest after visiting Giraneza’s group, the trackers followed some fresh gorilla trails and were charged by a silverback who was with another gorilla. We suspect that they may have encountered Inshuti and his only female, Shangaza, whom we had lost track of in July 2012.

More details about all these groups here.