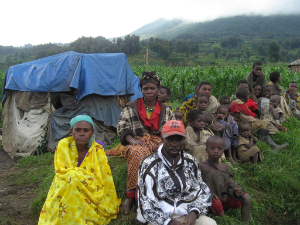 The historically marginalized people formerly known as the Batwa, who live on the slopes of Muhabura volcano in Rwanda, didn't have much to begin with. But when they lost their land – the result of an encounter in a bar – their social status diminished even further. The Rwandan government is beginning to take measures to integrate them into society, starting with removing the ethnic label of Batwa. Concurrently, the Fossey Fund and partners are hoping to boost this particular community by helping them get back their land and plant subsistence crops. It is consistent with the Fund's efforts to protect the habitat where mountain gorillas and other endangered species live.

In late April the Fossey Fund and the Rural Environment and Development Organization (REDO) worked with the community to plant potatoes and tree tomatoes on the land that was re-acquired for them in 2008. It is a small step in helping the 79 people who live there step out of the margins of society. Prior to having this land to cultivate, they had resorted to begging, says local chief Jean Bosco Kahyabugarura. When they sought the aid of their neighbors they were often beaten. The forest just up the slopes used to be another option where people could find food. But it is now forbidden to enter the forest, says Kahyabugarura.

"We can't expect people to avoid using forest resources if that is their only way to survive," says Fossey Fund President and CEO Clare Richardson. "For several years we have helped communities near Volcanoes National Park to develop other sources of food and income. The Batwa have had to overcome many challenges as they changed from hunter-gatherers to farmers, but they are again making progress."

Their last crop yielded about 300 kilograms (660 pounds). About three quarters of the food is used for themselves and the rest is brought to market. This allows the new farmers to feel like they are contributing to the economy and to gain some respect from their neighbors. It also generates a small amount of income with which they can buy clothes and other foods that they do not grow themselves, like beans.

Learning cultivation and agricultural techniques has helped boost the confidence, health and societal status of these historically marginalized people. But it is an incremental step in achieving any semblance of a quality of life. The children often skip school because they are hungry and cannot afford the uniforms. Damascene Gashumba of REDO is currently looking for a school with which he can partner to sponsor buying the children uniforms. 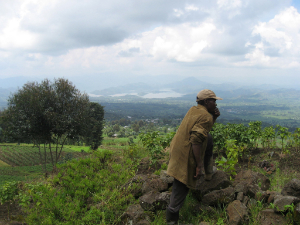 They have no place to safely store any excess crops for future use or sale. They live in tiny, tattered, tent-like "homes" with dirt floors, no walls, and barely space for one person, much less a whole family. "In America, can you imagine a world like that one?" asks Ildephonse Munyagero, Ecosystem Health Program manager with the Fossey Fund. "When we hear people are fighting and spending millions of dollars on bombs when other people are suffering from hunger, lack of shelter and education, we are likely to weep." Even though he grew up in a small, poor village in Rwanda, he had no idea that people in his country lived like this.

Janvier Kwizwera, the community conservation warden with the Rwanda Development Board in Volcanoes National Park, says that the crux of the problem is integrating the marginalized people with the rest of society. It is a long process, he says, but through the work of the Fossey Fund and their partners integration is beginning to take root.