October and November are bamboo shoot season in Rwanda's Volcanoes National Park. As the gorillas converge on the bamboo zone in the lower-altitude regions of the park, we often observe more interactions between groups and also encounter the challenge of gorillas leaving the park. This bamboo season, the gorillas also welcomed some new members into their midst.

Interactions in the bamboo zone 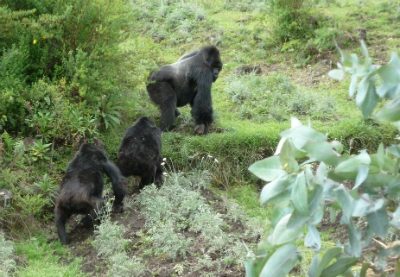 So far, field staff have observed three different interactions in the bamboo zone, between Pablo’s group and Kuryama’s group; Ugenda’s group and Gushimira’s group; and Musilikale’s, Isabukuru’s and Kuryama’s groups. The last interaction was particularly interesting, as it involved three different groups and resulted in the transfer of a young female, Akamaro.

Musilikale’s group and Kuryama’s group were the first to encounter one another in the late morning. Kuryama’s group, led by dominant silverback Kirahure, clearly wanted to avoid the interaction, traveling far and quickly to try to stay away from Musilikale. Musilikale pursued them closely, but both groups eventually encountered Isabukuru’s group in the forest.

“Kirahure took advantage of the distraction with the third party to finally move away,” Gorilla Program Manager Veronica Vecellio said. “Musilikale and Isabukuru continued the interaction.”

The two groups continued to exchange displays and to move around a lot in the dense cover of the bamboo. Eventually, sub-adult female Akamaro transferred from Musilikale’s group to Isabukuru’s group and moved away with them. “She’s doing fine since the transfer, despite antagonistic approaches from the other females in the group,” Vecellio reported.

Gorillas out of the park

“This year, as in previous years, the gorillas were out of the park,” Vecellio said. Since bamboo grows close to the border of the park, once the gorillas are lured to the area by the prospect of bamboo shoots, they often become tempted by another favorite food, eucalyptus. The eucalyptus is planted outside of the park by local communities for firewood and building material. When gorillas get into the eucalyptus plantations, they can destroy the trees and also risk close encounters with humans and domestic livestock, with whom they can exchange diseases.

“The worst case is always Titus’ group that the trackers usually have to herd back into the forest,” Vecellio says. Dominant silverback Rano has grown particularly comfortable ranging outside of the park boundary, sometimes travelling quite a long distance from the boundary and staying there for a long time. For their safety, trackers often make the decision to “herd” the gorillas back into the park using visual cues like sticks and by making noise.

“So far, the gorillas have come out of the park eight times and Titus’ group had to be herded back once. We expect to see many more occurrences in November,” Vecellio said. 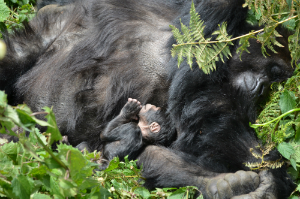 Female Nahimana from Ntambara's group gave birth on Oct. 21. Vecellio reported, “When the trackers arrived, they saw the baby still wet, and the mother was cleaning it. Clearly, the delivery had occurred just a few minutes before.” This infant is Nahimana's fourth. Sadly, she lost her second one in 2008 within the first week of its life. The other three, including the newborn, are with her in Ntambara's group.

After such good news, trackers were happily surprised to discover a second new infant in Ntambara’s group soon after. 23-year old female Kubaka was found with a new infant on Nov. 1.

Research Associate Winnie Eckardt, Ph.D., remarked that Kubaka is quickly rising among the ranks of the most successful females on record with the Fossey Fund, with short intervals between births and five offspring, all of whom survived. In the difficult climate and sometimes challenging social world of gorillas, this is quite a feat. But Kubaka may have a good strategy for her success. Eckardt says, “I remember her being one of the strictest mums, with no giving in!”

Ishema, from Pablo’s group, also gave birth in October, to her third infant. Her son Imfura, born in 2008, is now a juvenile and still lives with her in the group. Her second infant was born in August 2012, but disappeared mysteriously shortly after birth. 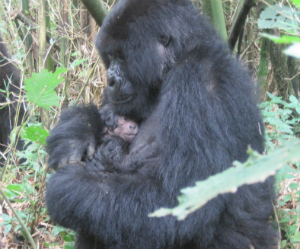 Pablo’s group used to be the largest group in Volcanoes National Park, but recently lost several members when silverback Musilikale split off from the group and took female Mahane and four other gorillas along with him. Then Pablo’s group lost females to an interaction with Susa’s group (habituated for tourism), which had succeeded Pablo’s group as the largest in the park. Happy to see that the group was able to count a new member among its ranks after recent losses, Vecellio exclaimed, “Pablo's group is now 36!”