After more than two weeks, the members of Ntambara's gorilla group were seen back together on Friday. The group became severely disrupted starting on Nov. 12, when they interacted with two lone silverbacks (Himbara and Mizero), leading the group to split into several subsets (click here for original news story). Young silverback Twibuke was in front, leading the group quickly to the west side of Mt. Bisoke. 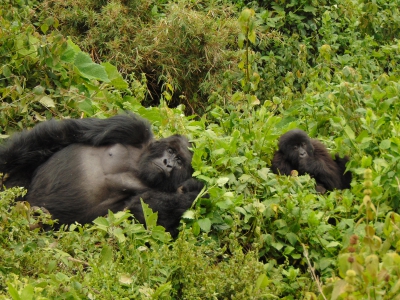 However, over the weekend, lone silverback Himbara once again interacted with the group. After an initial exchange of displays, though, the group seemed to accept him and he remained peacefully in the group. But this unusual development was too good to be true, and by Monday morning, Himbara had separated, taking with him the same three females who were with him a few days ago.

This means that our trackers must follow each group separately again, with Ntambara’s gorillas reaching the top of Mt. Bisoke, and Himbara’s group halfway downhill on the western slope.