Nyandwi Transfers from Pablo to Inshuti

On August 21, female mountain gorilla Nyandwi transferred to Inshuti’s group from Pablo’s group during an interaction between the two groups. Pablo’s is the largest gorilla group observed by Karisoke, with about 45 members currently and 65 at its height before the three formerly stable research groups began to split in 2007. For a year or two, as ambitious young silverbacks were heading off with their followers to start new groups, females also became unusually independent, with 20 transferring during 2007. For the past few years the resulting nine groups have mostly stabilized but female transfers still occur, if less frequently. Three females transferred to new groups during 2010.

Many female gorillas transfer from one group to another, most often to increase their chances for reproductive success by avoiding inbreeding, infanticide and competition in a large group. Some may stay in their natal group all their lives while others may transfer more than once. They are guarded by the males in their group, but opportunity knocks when the males face off with those in another group or with a silverback who has been travelling on his own, waiting for a chance to acquire a female for himself and start his own group. The females usually make their move while the males are confronting each other. 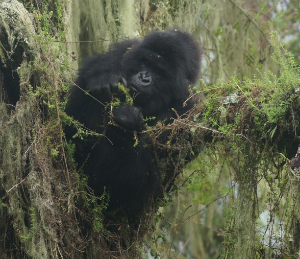 Nyandwi’s transfer followed the familiar pattern. She is 8, the age when gorilla females reach sexual maturity and look for the best mating opportunities. She is also the sister of Cantsbee, the dominant male in Pablo’s group, and she is from the same family as half the mature males (more than 8 years old) in Pablo’s group.

Regardless of its advantages for the female and her future offspring, Nyandwi’s transfer did not occur without intense resistance from Pablo’s silverbacks. Their interaction with Inshuti’s group lasted two hours, during which Cantsbee and the second-ranking silverback on his side, Gicurasi, displayed and fought physically with silverback Inshuti.
Despite his advanced age, Cantsbee actively participated in the fight, hitting and being hit by Inshuti. Nevertheless, the beta male Gicurasi was the most involved, facing Inshuti at close range in a strut stance, a confrontational posture used by silverbacks. The two silverbacks exchanged many displays, pounding the ground and beating their chests loudly. They also pulled down branches and hit each other in a typical sequence of behaviors accompanied by hoots and loud screams.
After an hour, while the other members of each group stayed behind their respective silverbacks, Nyandwi approached Inshuti. She was soon kept on that side by Inshuti, who continued to display while pushing her away from Pablo’s silverbacks. The interaction ended when Inshuti began moving away with his group, including Nyandwi, and Pablo’s group withdrew and walked off in the opposite direction.