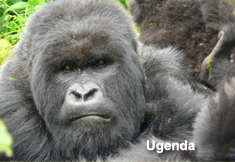 When the dominant silverback Shinda died in November 2008 his group split into two, one led by silverback Ugenda and the other by silverback Ntambara. Shinda had led one of the main groups of mountain gorillas observed for decades by the staff of the Dian Fossey Gorilla Fund International at the Karisoke Research Center in Rwanda. In fact, his birth was noted by Dr. Dian Fossey and his life was documented from birth to death. After he died, our researchers theorized that either one of the two remaining silverbacks (Ugenda or Ntambara) would become dominant and take over the group, or that the group would split into two, with each of them leading their own. Although there were quite a few back-and-forth movements, the two silverbacks did eventually split and formed two groups in March. Now even more changes are happening within Ugenda’s group.

After Shinda’s death, 21-year-old silverback Ugenda was the one who managed to keep the majority of group members, and became the leader of a group of 19. Ugenda’s group also has two other silverbacks, who are younger: 18-year-old Urugamba and 14-year-old Wageni.

The three silverbacks began to collaborate on group protection. Ugenda became the group’s central figure and was followed by most of the individuals. The young silverback Wageni was also close to Ugenda and integrated in all group activities. Urugamba, while somewhat on the periphery, was never alone. His association with the female Bishushwe started in Shinda’s original group and remained stable.?

But now all this may be changing.

Ugenda is not indifferent to this aspect of Urugamba’s behavior and on three occasions, the two silverbacks have had aggressive encounters. The most recently observed aggression between the two was caused by the sexual interest showed by Urugamba toward Pasika. After Ugenda’s aggressive alert, which Wageni supported, Urugamba moved away. In a few minutes, however, he mated with Pasika, who visibly solicited the encounter. 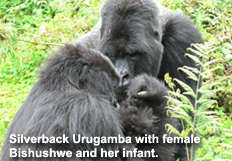 Finally on June 19, Urugamba, with five individuals, left the main group and moved 400 meters away. The subgroup composition was predictable based on previous observations. The group includes the three females, Bishuhswe, Pasika and Imvune, and the infants of Bishushwe and Pasika. The subgroup remained isolated for the entire day and rejoined Ugenda late on the following day.

This was the first of the frequent split-reunion events that continued during July. Since then the group has split seven times and reunited after no more than a day. The distance between groups never exceeded 500 meters.

Just a few changes in the subgroup’s composition differentiated the group-split sequence. One time female Imvune remained with Ugenda, and another time female Kubyina joined Urugamba’s subgroup. The reunion between the groups occurred regularly without agonistic (combative) interactions.

If Ugenda’s group really does split permanently, it would increase the number of gorilla groups using the same area of the park. The number of gorilla groups monitored by the Karisoke Research Center has increased from three (before 2007) to eight, and yet no group has shifted out of the home range. Consequently, the distances between groups has decreased and the frequency of inter-group encounters has increased. This situation has facilitated the high occurrence of female transfers among groups.

The possible formation of Urugamba’s group would be a further element of complexity for the already intricate dynamic observed in the research groups in the last two years. Stay tuned for more information!