The largest group of mountain gorillas monitored by the Dian Fossey Gorilla Fund has been led for almost 20 years by 37-year-old silverback Cantsbee, an historic gorilla who was first seen by Dian Fossey. She gave him his name when he was born in 1978. 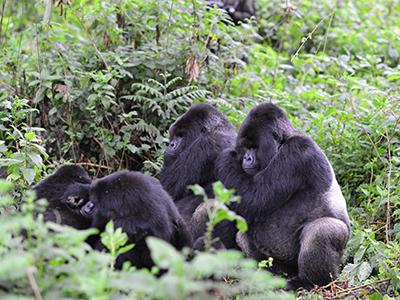 But now, Cantsbee has reached elder status, and while he still seems healthy and strong, it is understandable for his leadership to be challenged. The challenge comes from his son, Gicurasi, and has gone up and down over the past year or so.

The first half of 2016 was marked by upswings in challenges by Gicurasi, who is younger, stronger and has already spent years leading the group’s protection and mating activities, though without “official” recognition from all group members.

One way that our staff recognizes leadership challenges is by observing the frequency of what are called “displacements,” in which the challenger crosses in front of the leader, or takes another dominant position in the group, and sees what reaction he gets from the elder leader. This year, such displacements have increased in number and a couple of them ended in physical fights, with clear submission by either Cantsbee or Gicurasi. Most of these episodes were won by Gicurasi, but Cantsbee showed surprisingly strong opposition two times.

There’s also a third silverback in the group, named “Kureba,” who has taken a clear stance in supporting Cantsbee, but recently he has remained peripheral to the group and doesn’t intervene. The support of Kureba seemed to have been crucial during the one time when Cantsbee rebelled strongly against Gicurasi, physically dominating his son by biting him on the back and forcing him to the ground for a few seconds. Another time Cantsbee refused to be passed by Gicurasi and sped up to keep the front position while the group was moving.

Despite these instances, it seems that Gicurasi is on the way toward full dominance. Our field staff, who know these gorillas intimately, feel that it is now time for Cantsbee to “retire” from dominance and finally allow Gicurasi to be accountable for group movements and protection. Given his age, elder Cantsbee can actually benefit from a subordinate position and will still be surrounded by many loyal group members.

“The Cantsbee and Gicurasi dominance shift is a detailed documentation on how gorillas deal with personal conflict and the overall successful strategies used to protect their group,” says Fossey Fund Gorilla Program Manager Veronica Vecellio.

Cantsbee and Gicurasi lead the largest group of gorillas known, named after a much earlier silverback – the late Pablo. It currently contains 30 gorillas, after reaching a high of 65 gorillas in late 2006. The reduced size is mainly due to subportions of the group splitting to form new groups, plus the transfer of some females and some of the young silverbacks leaving to become solitary.

Even though we have been observing mountain gorilla groups for nearly 50 years, we have only a few examples of dominance shift between silverbacks, and all of those occurred due to a unique trigger (such as death of a silverback), rather than due to old age.

So the Cantsbee story is exceptional in this way, and in many others. We have monitored this group daily since 1992 and Cantsbee himself is one of the longest observed of all gorillas, monitored since his birth in 1978. The group’s history highlights most of we know about mountain gorilla social life and demography and yet it is giving us opportunities to reflect on what we still need to know about their individual variability, resilience in the face of change, and strategies for success.

“Being able to observe the gorillas for many hours every day gives us the opportunity to accurately document the shift in dominance, because it allows us to detect rare behaviors and reactions that last just a few seconds,” says Vecellio. “Most of the time, the two males actually keep a peaceful tolerance and a certain distance between themselves, so it would be hard to see that something is going on if you just observe them for short time. We are very curious to see how this will end and will never stop learning from them!”