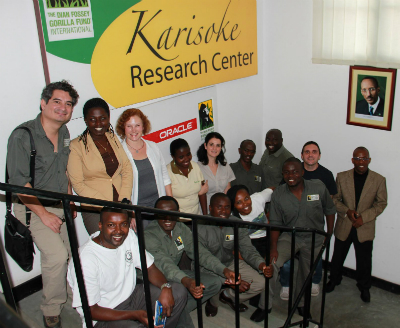 Mountain gorillas are the only great ape whose populations are known to be increasing. The Dian Fossey Gorilla Fund International has been working with our partners in gorilla conservation for more than 45 years to facilitate this growth. One of the factors that we believe is most important to the Fossey Fund’s impact on this conservation success story is our steadfast commitment to gorilla conservation and the local people who make it possible, even during the most difficult of times. We have remained on the ground in Rwanda and the Democratic Republic of Congo (DRC) in the wake of war and natural disasters, to provide daily monitoring and protection to gorillas, support local park authorities through anti-poaching patrols, collect scientific data to help guide conservation decisions, and implement community education and development programs. It is the critical support of our many loyal supporters that allows us to do so. Oracle is among our most long-term donors, offering generous financial support for our program for more than 25 years.

Recently, Oracle has taken an additional step in its support for our activities – one which brings to bear its tremendous technological talent and resources. A leader in engineering software and hardware, Oracle has invited the Fossey Fund to work with its technologists to scope a new project: hosting the Fossey Fund’s long-term databases on gorilla behavior, demography and ranging in the Oracle Cloud. Data that dates all the way back to Dian Fossey’s first field notes – taken shortly after she established the Karisoke Research Center in 1967, and possibly even the Fossey Fund’s media collection, would be hosted in the Oracle Cloud, available virtually, anytime, anywhere. Dovetailing with this project, Oracle has also offered to provide funding for the development of a new mobile application which will enable the Fossey Fund to move from paper and pencil modes of data collection to more efficient and accurate methods using handheld devices like smart phones.

Colleen Cassity, the executive director of Oracle Giving, recently made a trip to Rwanda to see the Fossey Fund’s programs in action and to meet the team behind our work. Cassity spent three days with our team, meeting with staff and touring the labs and offices at the Regional Research Center in Musanze to see firsthand how the data and sample collection in the field is processed and analyzed by researchers. On Cassity’s second day with the Fossey Fund, she trekked to see the Agashya group of gorillas, monitored by the Rwandan park authority (RDB). Cassity said, “I loved how clearly at ease [the gorillas] were with our presence and how intimate and complex their relationships are, just like ours.” 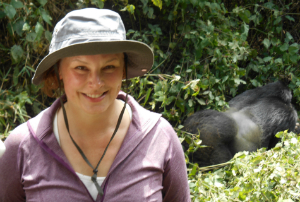 After the gorilla trek, Cassity visited with the Fossey Fund’s field staff, who had gathered at the tracker house in the village of Bisate to greet her after their day tracking gorillas in the forest. She expressed her appreciation for the Fossey Fund’s efforts to support the talent of local Rwandans in studying and protecting mountain gorillas and their habitat and the close cooperation between the Fossey Fund and the community, including the park authorities. Cassity pointed out what an asset the mountain gorillas are to Rwanda and to the community living near Volcanoes National Park. “There is an enormous responsibility that we have as homo sapiens to be good stewards of that ecosystem,” she said.

The team was left energized by Cassity’s visit and is excited to embark on this expanded relationship with Oracle, which will help us to continue to use science and research to guide conservation efforts. Tara Stoinski, Ph.D., the Fossey Fund’s vice president and chief scientist says, “We have taken the first steps towards building an online database with the help of our partners at the University of Maryland and generous funders like the Richard Lounsbery Foundation. Now, with Oracle’s support, we will be able to take our data management to the next level.” Stoinski cites the accessibility of a cloud-hosted database as one of its major advantages, since it will facilitate more efficient collaborations and means of sharing data with the Fossey Fund’s partners and with scientists around the world.

Research Associate Damien Caillaud, Ph.D., who has managed much of the database’s development thus far, says, "Our partnership with Oracle will really transform our data management system. Thanks to modern wireless technologies, data will be uploaded and ready to analyze on the same day they are collected, and instantly sent to Oracle's U.S.-based servers. Our researchers will be able to visualize and analyze all the data in real time, which will greatly improve our ability to detect and respond to potential threats."
Remarking on why this project is a natural next step in the relationship between Oracle and the Dian Fossey Gorilla Fund, Cassity said, “Big data is an enormous part of the discourse in the technological community these days, and the Fossey Fund has truly big data!”

Everyone at the Fossey Fund is pleased to begin this new chapter of the relationship with Oracle. Clare Richardson, the Fossey Fund’s President and CEO, says, “It is rare to find a corporate giving program funding a not-for-profit for 25 years and doing so with little or no fanfare, yet this is the case with Oracle. The sustained support Oracle has provided for the Fossey Fund's on-the-ground field conservation efforts has allowed us to protect mountain gorillas in Rwanda through civil war and genocide. As Rwanda has entered a promising period in its history, and mountain gorillas are thriving, the Fossey Fund and Oracle can together focus on ways to manage Karisoke’s 46 years of gorilla data, which may already hold the answer to ensuring that mountain gorillas survive.”