The first group of orphaned gorillas was successfully airlifted by helicopter on April 27 to the Fossey Fund's new GRACE (Gorilla Rehabilitation and Conservation Education Center) in Congo, where they are off to a very successful new life. 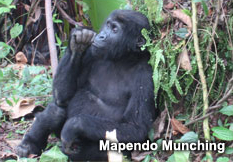 The flight was provided by the United Nations' peacekeeping force in the Democratic Republic of Congo (DRC), after weeks of planning and logistics, to move the gorillas from temporary facilities in Goma. This included building crates to hold the gorillas, training them how to get in and out of the crates, choosing take-off and landing sites, organizing necessary personnel and hoping for good weather.

Sandy Jones, the Fossey Fund's manager of confiscated gorilla rehabilitation, had been looking forward to this moment since she arrived in Rwanda and Congo over a year ago to take care of the orphaned gorillas. Jones was nervous that the gorillas would be scared by the forest, but they seemed completely at home, eating everything. "They're so happy!" she said, after watching their arrival. 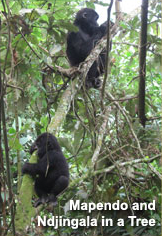 "I cannot believe this is actually happening," says Jones. "It's so exciting." She reports that they immediately seemed at home and began eating all the natural foods waiting for them in the forested area.

Dr. Katie Fawcett, director of the Karisoke Center, who was also on the journey, agreed enthusiastically: "It was fantastic!" she said. "In the morning there was a lot of stress riding to the airport and getting on the helicopter, but now they've arrived and they're like kids with sweets. It's been a very successful transfer. The gorillas adapted very quickly to their new home. Especially their knowledge of the forest foods bodes well, so they have not forgotten what they learned as youngsters…"

In their first few days, the orphaned gorillas were already behaving like naturals in the forest, climbing trees, making night nests, and even forming group leadership (young male Kighoma seems to be taking the role of "silverback"). 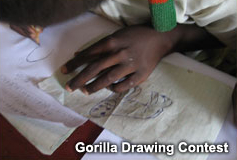 Nearby, Fossey Fund staff went to the Muyisa primary school in Kasugho, to give presentations on the gorillas' arrival and show lots of photos. The children had a drawing contest on gorillas and sang songs about the gorillas, in addition to reciting poems about conservation.

The GRACE center was built on land donated by the Tayna Center for Conservation Biology (TCCB), with initial support from the U.S. Fish and Wildlife Service, Disney Worldwide Conservation Fund and Disney's Animal Programs, and Pan African Sanctuary Alliance. The center will be a joint initiative of the Congolese wildlife conservation authority (ICCN) and the Dian Fossey Gorilla Fund International, along with other groups.