One month after he was confiscated in Walikale territory in the Democratic Republic of Congo, infant Grauer’s gorilla Kyasa has reached his new home, at GRACE, the unique rescue facility in Congo where orphaned Grauer’s gorillas are being rehabilitated and prepared for release into the wild. 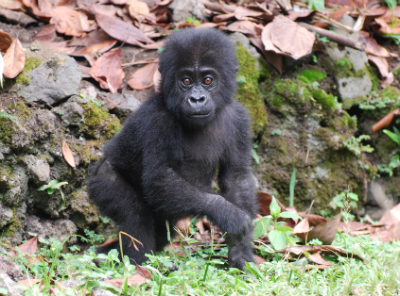 Kyasa, who is about 7 months old, has made tremendous progress since being rescued from poachers in late December. Upon confiscation, he had a wound on his hips, most likely from a rope he had been tied up with, and he was stressed and moderately dehydrated. He was sturdy, however, and willing to drink milk from the very beginning. During his one-month quarantine, which he spent in Goma closely supervised by caregivers and veterinarians, he gained a lot of strength and self-confidence. He was already climbing trees, playing, and trying to chest-beat – even though at this young age his coordination is not yet fully developed.

On the last weekend of January, he made the trip to GRACE, first by plane and then by car for several hours, on a muddy, pot-holed road. He didn’t seem to be inconvenienced too much, though, as he arrived upbeat and ready to explore his new environment. Accompanying him were Sandy Jones, our confiscated gorilla program manager, and Luitzen Santman, the new interim GRACE manager, as well as Kavira Kakule, who is Kyasa’s primary caregiver. Immediately after arrival, Kyasa was taken by his caregivers to explore the forest that surrounds GRACE. 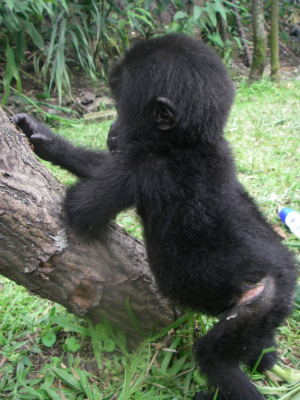 “He was very excited and not at all fearful,” said Santman. “He is now settling into his new routine: sleeping in a room with Kavira or Sandy, and spending all day outside in the forest.”

Kyasa, who was named after a river in the area where he was confiscated, is the fifth and youngest Grauer’s gorilla currently at GRACE. The other four – Mapendo, Kighoma, Amani and Ndjingala – were captured by poachers at different times and in different locations in eastern DRC, but for the past 10 months have formed a cohesive group together. They were also transferred from Goma to GRACE, and have since then grown tremendously and become ever more independent. Apart from the morning and evening sorghum-soy-and-maize porridge – called Sosoma – that they receive in their night-house, they now eat forest foods exclusively.

It is expected that Kyasa will be introduced into the group as soon as his four-week post-travel quarantine period finishes. So far, he has heard and even seen the other gorillas pass by.

“He was obviously very curious, and was watching them with very big eyes,” said Santman.

At the same time as Kyasa is getting used to his new life at GRACE, six other Grauer’s gorillas, originally rescued from poachers in the DRC but currently cared for in a temporary facility in Kinigi, Rwanda, are also awaiting their transfer to GRACE. In total, the state-of-the-art facility will be able to hold about 30 orphaned gorillas. It is hoped, however, that this will never be the case.

“We keep praying that no other infant will be taken by poachers, but we know this is not realistic,” said Jones. “Since 2003, we have received an average of two gorilla orphans each year in eastern DRC. Since Grauer’s gorilla territory is so vast, and for the most part unexplored and insecure, we do expect more confiscations in the future. At least now we have this fantastic place, and we owe it to the Congolese people who agreed to give this huge forest for rehabilitating gorillas.”

Kyasa’s confiscation in Walikale and safe passage to GRACE would have been impossible without the help of our local partners. It was the representatives of UGADEC – an association of community-based reserves – who blew the whistle alerting us to the orphaned gorilla, confiscated it, and brought it to Goma. UGADEC also offered its premises for Kyasa’s one-month quarantine in Goma. When the time came to move to GRACE, we received invaluable help from Pierre Kakule Vwirasihikya, the coordinator and legal representative of UGADEC and TCCB University, who expedited the paperwork and arranged for easy-passage formalities at Goma airport.

GRACE was initiated by the Fossey Fund, at the urging of the Congolese national park service (ICCN) with funding from the U.S. Fish and Wildlife Service, and design and construction assistance from Disney's Animal Programs. The Fossey Fund and The Walt Disney Company are the first of several partners that will continue long-term funding and operation of the center. Veterinary support for Kyasa has been provided by the Mountain Gorilla Veterinary Project.