A New Addition to GRACE 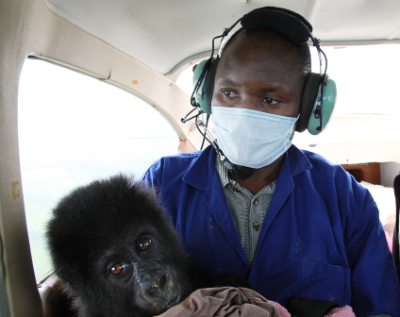 Shamavu, the fourth infant gorilla known to have fallen victim to illegal gorilla trafficking in the Democratic Republic of Congo this year and confiscated by Virunga National Park rangers, was airlifted to the Gorilla Rehabilitation and Conservation Education (GRACE) center on Friday, Oct. 28, where he will complete a 30-day quarantine period. The infant’s journey to his new home was a large-scale land and air operation, requiring the collaboration of the Dian Fossey Gorilla Fund International, the Congolese Wildlife Authority (ICCN), the Mountain Gorilla Veterinary Project and Virunga National Park.

At the GRACE center in North Kivu province, the 1.5-year-old infant will join other gorillas of his own subspecies (Grauer’s or eastern lowland gorillas). Although it is difficult to estimate the number of Grauer’s gorillas left in the wild, due to the instability of the region they inhabit, the population is believed to have declined drastically over the last decade as a result of poaching and habitat fragmentation. The GRACE center is dedicated to providing sanctuary for young Grauer’s gorillas that have fallen victim to the illegal wildlife trade and have subsequently been confiscated by Park rangers. Eleven Grauer’s gorillas are currently in residence at GRACE and, after the youngsters have acquired the necessary social and survival skills at the facility, the Fossey Fund hopes that they will one day be released into the adjacent Tayna Nature Reserve.

Shamavu certainly endured a traumatic capture, as most poached infants do, witnessing the death of his entire family and pried from his mother’s lifeless body. He was reportedly confined in a small knapsack for a month before the ICCN confiscated the infant in Kanyaboyonga in the Walikale area of North Kivu province on Oct. 8. When the ICCN received word that another gorilla infant had been poached, an undercover sting operation was initiated, and the team of rangers drove eight hours into the Walikale territory to meet Shamavu’s captors and pose as potential black market buyers. The three Congolese poachers were demanding $40,000 for the infant. If justice prevails, it appears that they will receive 10 years in a Congolese prison instead.

Conservation organizations are concerned that the poaching of infant gorillas appears to be on the rise. Shamavu – named after one of his Virunga Park ranger rescuers, Christian Shamavu – is just one more in a string of infants to be confiscated from poachers since April. “But this is just the tip of the iceberg” says Juan Carlos Bonilla, the Fossey Fund vice president of Africa programs. This is the highest number of confiscations in a single year to date, and conservation partners are certain that for every infant confiscated, there are many more that disappear in the black market trade. 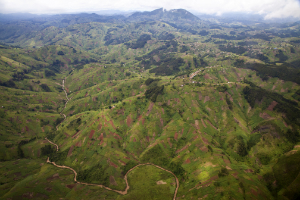 Piloted by Virunga National Park Warden Emmanuel de Merode, the little 1975 Cessna 187 made the scenic hour-long flight from Rumangabo to Butembo with no hiccups, soaring over the verdant Virunga Park landscape and landing smoothly on the dusty airstrip closest to GRACE. Accompanying De Merode in the tiny four-seater cockpit was Fossey Fund caregiver Kakule Kayivumba, with the baby gorilla sleeping soundly in his lap; Dr. Eddy Kambale of the Mountain Gorilla Veterinary Project; and the Fossey Fund's Field Communications Officer Jessica Burbridge, all wearing white surgical masks and headsets.

Shamavu has spent the better part of the last three weeks in Kayivumba’s care at the ICCN’s Senkwekwe Center, and the infant clearly regards Kayivumba as his personal protector. Once on the plane, Shamavu took some time to peer out from the top of his blanket-nest on Kayivumba’s lap and then closed his eyes and drifted to sleep after the plane took off, soothed by the sounds of the engine and the warmth of his caregiver.

The peaceful plane ride completed the second leg of the infant’s three-part journey to his new home. GRACE center Manager Luitzen Santman and his team of caregivers traveled the 100km from GRACE to the Butembo airstrip by truck, across the unstable eastern region of the Congo, ready to meet the plane when it landed and receive the precious cargo. The plane touched down near a small crowd of locals who had gathered along the dirt runway, eager to catch a glimpse of the plane’s occupants. But Kayivumba and Dr. Eddy had wrapped the infant in a pink sheet and swiftly transferred him from plane to truck, keeping the onlookers unaware of what was happening. As Shamavu’s primary caregiver, Kayivumba will travel to GRACE and stay for several weeks, in order to ease the transition for the traumatized young gorilla.

Luitzen Santman communicated via satellite phone from GRACE later that afternoon, saying that the team had arrived safely around 4 p.m. and Shamavu was “in the forest with Kayivumba and Kambale, seeming to enjoy his new environment and exploring the forest vegetation.”

At home at GRACE

Deep in the forests of the Kashugo region of eastern Congo, the GRACE center provides sanctuary to Grauer’s gorilla poaching victims and is the first permanent facility designed specifically for this endangered gorilla subspecies. The center was completed in 2010, with design and construction assistance from Disney’s Animal Programs and Pan African Sanctuary Alliance and funding from the U.S. Fish and Wildlife Service. The site was donated by the Tayna Center for Conservation Biology. The state-of-the-art center has the capacity to house 30 young gorillas, with the aim of eventually releasing them into the neighboring Tayna Nature Reserve’s 350 acres of protected forest.

Unfortunately, GRACE will likely continue to receive a steady stream of orphaned Grauer’s gorillas. Bonilla pointed out that “most of the confiscated gorillas are coming from the Walikale region of DRC. While the GRACE center is extremely important, the center alone is not going to be enough. We’re gearing up to head into the heart of Congo, and as of January 2012, we’ll be putting Fossey Fund teams on the ground to deal with [the problem].”

An increased presence in the field has proven highly effective for the mountain gorilla population in Rwanda’s Volcanoes National Park. We hope that implementing the Fossey Fund’s “active conservation” approach in the DRC will prove the same for Grauer’s gorillas and save this subspecies from extinction.